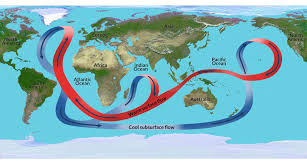 Ocean water has been  divided into major  five layers from surface to bottom by the  modern scientists according to salinity, density, temperature, presence of Sun light, pressure etc.  These five layers are Sunlight Zone-Continental shelf (Surface to 200 m),Twilight Zone-Continental slope (200 m to 1000 m), the Midnight Zone-Continental Rise (1000m to 4000 m), the Abyss-Ocean Basin (4000 m to 6000 m), the Trenches (6000 m to 11000 m). The pressure is continuously increasing with depth, which reaches to 8 tons/sq inches( or 600 bar at 6000 m depth)  at Ocean’s floor.. Temperature falls sharply up to 500 m after which it remains constant(less than 2 ⁰) with depth & reaches to freezing point at bottom. Salinity decreases sharply with depth up to 500 m, then it remains constant with depth. Density of water increases continuously with depth  which causes enormous pressure at Ocean’s floor. The variation of above parameters at different points from Coastal area to central area  of Ocean, changes of above  parameters with Ocean’s  depth together with spinning of Earth on its axis, Global flow of wind from pole to equator & vice versa ,regional  flow of wind from Continental land masses towards Ocean & reversal of this flow of wind is creating very complex pattern of Ocean wave, Currents etc.  at the surface & in deep water or very interesting  pattern of Ocean behaviour is displayed, which has got major influence on overall   World’s climate.

Among the above parameters the salinity is the most influential factor and 2nd or next influential factor is difference of temperature which generates different pattern of Ocean waves or currents. Evaporation of water & formation of ice both increases the salinity. In opposite way showering of rain water, discharge of river water in coastal area reduces salinity locally. In polar region rate of evaporation is very low & ice is formed at very high rate due to freezing temperature which causes ejection of enormous amount of salt in liquid water. This situation raises the density of water to a very high level , which  causes the movement of cold water downwards & it create high pressure at bottom of ocean. So in upper level water will flow from Equator to polar region or from high temperature to low temperature region results from convection flow of heat. But in lower level water will flow from polar region to  equator or from high density  to low density area  according to law of fluid mechanics to compete the cycle. Also flow of wind & spinning of Earth will have major influence  on Global Ocean Currents & it will be analysed in detail in subsequent chapter.

Gyres formation in Ocean surface  due to East west wind flow & Rotation of Earth on its axis.

Water & land has different heating capacity or water takes more time to warm up & cool than that of land. During the day time high radiation of Sun heats up land very quickly which raises temperature of surrounding  air. So air having high temperature moves upward that results low pressure due to evacuation in land at very high rate. But air pressure on the surface water of Ocean is high due to slow rise of air temperature there causes from lower  rate of heating capacity of water than that of soil. This situation results the flow of air from high pressure area above Ocean towards low pressure area  over land. This wind flow from Ocean towards Continents creates  & drives the surface water towards coastal area from centre of Ocean. In the night reversal of flow will happen.  If there were no continents or Islands, then these Ocean  currents would have either Easterly or westerly flow. However these  continents , Islands, interrupt the Ocean Currents  and  with the  effect  of Coriolis force  at a  little higher latitude that  results closed circular current  patterns  called Gyres. The five major Gyres are North Pacific Gyres, South Pacific Gyres, North Atlantic Gyres, South Atlantic Gyres & Indian Ocean Gyres. 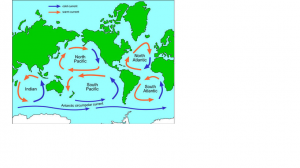 Ocean Currents driven by   North south flow of Air & Spinning of Earth on its axis.

If Earth would not have been Spin on its axis, then frictional coupling between moving air and Ocean surface would push thin layer of water in the same direction of  wind means it would only circulate between poles and equator. But the circulating air is deflected towards right in Northern hemisphere and towards left in Southern Hemisphere by Coriolis force that developed due to spinning of Earth on its Axis. The deflecting force or the Coriolis force increases at high altitude. Each layer of moving water sets the lower layer below in motion. The angle of deflection to the right of overlying layer is increasing with depth,  so the direction of water movement shift with increasing  depth. This increase of deflecting angle may attain such a value at certain depth that causes flow of water in opposite direction with respect to surface  current. The value of Coriolis force increases with depth, but the velocity of currents in each layer, in downward direction decreases during transfer of movement to lower layer, which , causes from loss of energy. The above phenomena  is also called Ekman Spiral.

The Ocean water is not at stand still, but in random motion throughout  the Globe which is called “Global Conveyor Belt”. The driving force of this Belt originates from Global flow of Wind, Temperature Difference ,difference of density which causes from Salinity difference ,(Together Thermo + Saline =Thermohaline) Spinning of Earth  on its axis etc. The Global Conveyor Belt is started in Norwegian Sea where it is charged by warm water originates from Gulf Stream. The Cold atmosphere of Northern high latitude absorbs heat & makes the hot water cold which causes higher density & finally it sinks to bottom of Ocean. AS more warm water moves towards North, the water becomes cools & sinks down which moves towards South to make space for incoming warm water. The cold bottom water flows south of the Equator which finally moves towards Antarctica. The cold bottom water returns to surface through mixing & wind driven  upwelling , that continues the Conveyor Belt which encircles the Globe 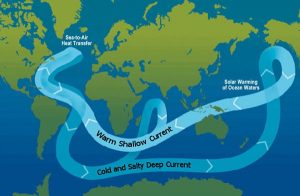 Ocean’s surface & deep water  currents may be generated from Tidal wave which results from Gravitation pull between Sun , Moon & Earth. It may also be produced from sudden Earthquake , Volcanic eruption at the Ocean’s floor, which  is  known as tsunami.

The surface current is visible and its pattern or characteristic is understood with little effort or without effort. The current in deep water means which exist several 1000 m under Ocean’s surface is understood with enormous effort & by  most sophisticated modern technology, probably in  last century only. But 1400 years before, the presence of current in deep water under Ocean’s surface which is invisible & it has been mentioned in the following verse of Holy Quran .

Sura Nur 24/40 Or is like the depths of darkness (Arabic-Julumatin) in a vast deep Ocean(Arabic-Baharin) overwhelmed with billow (Waves-arabic-Maojun)) topped(arabic-Faokihi) by billow(Waves-Maojun), topped by clouds(arabic-Shahabun) .Depth of darkness (Arabic-Julumatan) one above another. If a man stretch out his hands, (Arabic- Ead) he can hardly see it. For any to whom ALLAH gives not light (Arabic-nur), there is no light.

In the above verse first darkness layer by layer is mentioned and then wave above another wave layer by layer, then cloud at the top of Ocean has been mentioned. Description is started by  darkness means it has been started from bottom of Ocean, then wave above another wave layer by layer that  is “cold & high density deep water currents at bottom”  and wave under cloud is “Surface warm water low density currents” at the top, which altogether  contribute  also to form the “Global  Conveyor belt”. At high depth of Ocean, means at several 1000 m depth,  where  high  density  cold water  currents exists nearer to bottom & the intensity of darkness here  has been mentioned by the statement , “ A man stretched out his hand & his hand is not Visible”.

Donate Part of Zakat, Sadaqa or Earning online at www.CBET.ca, Get... 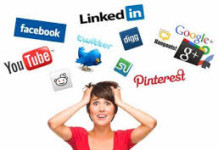 2016 January, Challenges and Opportunities with the Hyper-Connected World , Emdad...