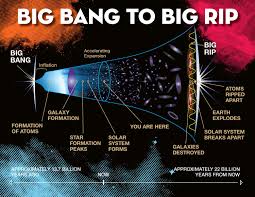 Expansion of the Universe has been accepted by all the astronomical scientists & it has been experimentally proved by Edwin Hubble in 1929. It has been noticed, any source of light when it approaches towards any observer the frequency of emitted light from it increases & when it moves away or moves  backward the transmission frequency of light decreases. Edwin Hubble discovered some interesting behaviour like, the frequency of light transmitted from all the celestial objects surroundings this Galaxy is decreasing with distance & time… The above characteristic of decreasing of frequency of light indicates that, all the celestial objects are drifting backward with respect to this Galaxy. He also discovered, the celestial objects located at more distance are drifting backward with higher velocity than the nearest one. This is only possible, if the Universe is expanding in all direction, then any observer from any point of this Universe will notice that , all the celestial objects are moving away or drifting backward from him. This phenomenon is same as if a balloon is spotted uniformly & is involved in a process of expansion, then all the spots will shift backward from any spot on the surface of balloon. So the event of drifting backward or moving away from this Galaxy is equivalent to expansion of the Universe & is a confirmation signal to support Expanding Universe concept. 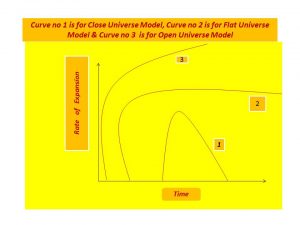 There is very important thing, which is to be mentioned here that, the rate of expansion increases with respect to distance (Nonlinear Characteristic) from this Galaxy, but rate of expansion is reduced with respect to time in future direction or it is increasing in the past if proceeded towards the point of Big bang. Or more clearly rate of expansion is function of both space (Distance) & time. Anyhow according to the opinion of present astronomical scientists, the density of matter within the Universe is the main factor to decide which of the above three options, it will follow.

Related to the above description of Expansion, contraction & shifting away of all celestial objects surrounding this Galaxy, the following verses of Holy Quran are represented here.

Sura Jariat 51/47 We built the Universe (Arabic-Shama-a) with our Mighty power, giving in its vast expanse. (Arabic-Moshiun)

Sura Anbia 21/104 On that Day, We shall roll up the Universe (Shama-a) like a Scroll of parchment, as We originated the first creation. So shall We repeat it. This is a promise binding on Us. Truly We shall fulfill it.

So verse 21/104 agrees with the concept of close Universe model.

Shura (Ahqaf) 46/3 We created the Heavenly bodies (Shamawati) & Earth & all that lies between them purely just for ends & for a specific term, but those who reject Faith turn away from what, they have been warned of.

The Arabic word “Shama-a” in verse, 21/104 ,that has been translated as “heaven” by some translators, which is not correct & does not make any sense. “Shama-a” is extremely long distance sky, “Shama-e” is nearest sky, “Shamawati “ is Heavenly bodies having solid, liquid, gaseous layers & “Shama-u” is damaged layer of sky filled by gaseous layer like Ozone layer according to different verses of Holy Quran.

The actual interpretation of above two verses of Sura 81/15 & 81/16 may be explained from  equation no “1” of modern physics. 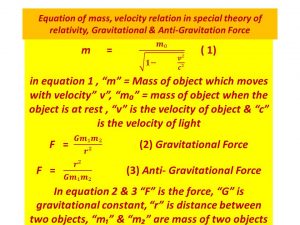 In above equation no “1” there are three conditions for celestial object moving with mass “m” having velocity “v” .

It has been mentioned in the first paragraph that “the celestial objects located at more distance, are drifting backward with more or higher velocity than the nearest one” that causes from a factor  anti-gravity , which is directly proportional to square of the  distance & inversely proportional to the product of masses of  two objects according to equation no 3 .Anti-Gravitational or repulsive force is weaker than Gravitational or attractive force at short distance but very strong or enormous  than attractive Gravitational force at long distance. (At least more than one million light year distance or roughly more than 9.5X 10¹⁸ Km distance) . This repulsive force is not effective in between two Stars or not active within the Galaxy but it is effective in between two Galaxies (The nearest Galaxy which is known as Andromeda Galaxy & it is located at 2.5 million light years distance).  Anti –gravitational force or repulsive force (Equation no 3) which causes accelerated expansion of the Universe is a function of space or distance & gravitational or attractive force (Equation no 2) that causes retardation of the expansion is a function of time. So considering the rate of expansion with respect to distance when the  celestial object cross the velocity of light, then  according to above equation no 1, its mass become imaginary quantity which causes it to disappear and the physical Universe or material Universe cease to exist. This situation cancels the old concept of infinite Universe means, at present the concept of Universe is a finite Universe. (The diameter of the Universe is 93 Billion Light years distance)

Similarly as the rate of expansion is increasing with respect to time if proceeded towards past or towards Big bang & in this way when the rate of expansion reaches at such a high speed, so that it is faster than the velocity of light , then again the physical Universe disappear according to equation no “1” , means material Universe did not appear at Big bang but after certain time or it is incomprehensible during this time period & before according to above equation. This situation again cancels the old concept of eternal Universe.(The age of the Universe is 13.79 Billion years)

The rate of expansion is decreasing with time in future direction indicates that attractive force due to gravity is increasing. This is only possible if new mass is in a process of continuous creation with time elapse.  Particle-anti particle pair (proton-antiproton, electron-positron etc.) can be created from empty space & particle-antiparticle pair may vanish during unification according to quantum mechanics, which supports the above characteristic of the Universe .This situation again cancels the old concept of law of conservation of matter which describes that “Matter cannot be created, cannot be destroyed but it can be transformed from one form to another form”.

. The rate of expansion with respect to time is nonlinear (Analogue in nature ) in characteristic according to the result of  experiment of Edwin Hubble, but about contraction or folding or collapsing characteristic there is difference of opinion among the scientists, which has been already mentioned above.

According to following verse of Last Holy Book the contraction or folding characteristic of Universe is not a nonlinear (not analogue) function but most probably very close to step change (Digital in nature) phenomena.

Shura Nahal 16/77 GOD alone has knowledge of the hidden reality of the Heavenly bodies (Shamawati) and the Earth & the coming of the Hour (Kiamat) is like the twinkle of an eye or even quicker. Surely GOD has full power over everything. 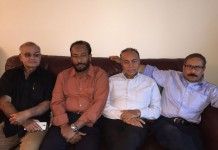 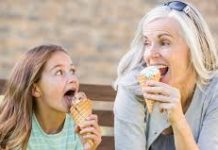 Quote: Do a Small Kindness for pleasure of God, Do not...