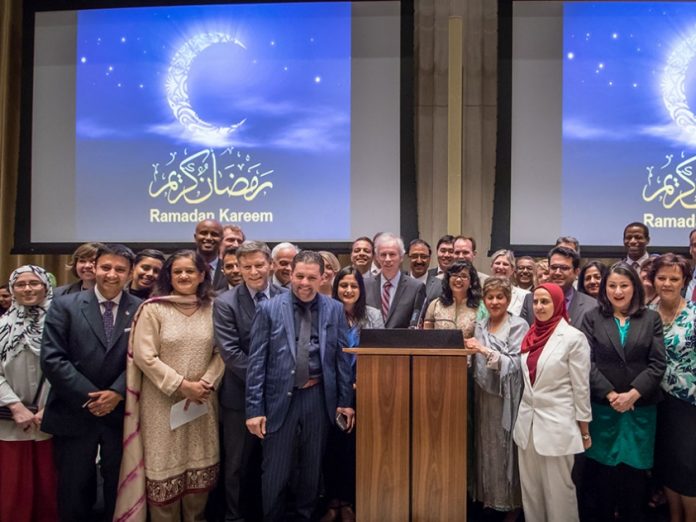 In this article, we like to highlight the progress of Ottawa- Gatineau Muslims identity and visibility since 1996 to 2018.

Compared to 1996, in 2018 Muslims are well organized as institutions, programs and activities. In 2016, Muslims sunder UMO-OG (United Muslim Organizations -Ottawa- Gatineau) gave a reception in Parliament to 20 elected federal Muslim MPs in the presence of half a dozen federal ministers and in turn federal 30 MPs in 2016 Ramadan hosted a multi cultural iftar event for over 600 Muslims in parliament. In 2016, in Ottawa EY center Muslims under UMO-OG, organized an ILEAD (Islam Learn Engage Achieve and Develop) conference with 3,000 in attendance. Also in attendance were over half a dozen federal ministers and MPS, provincial MPPs, City councillors, Mayor, RCMP and Police Chiefs.

Muslims Medina: Ottawa -Gatineau Muslims are immigrants or children of immigrants. Prophet Muhammad (PBUH) and his companions migrated from Makkah to Medina for preserving and propagating the Islamic way of life. They adopted Medina as their new home land. We migrated as refugees, or for a better standard of living, or to get education, etc. We should also adopt Canada as our new Medina, our adopted new home land.
Identity: In Canada, to do any transaction, one requires two pieces of identity; a driver’s licence or citizenship card or passport, etc. Knowingly or unknowingly, we seek an identity for ourselves or an identity given to us by others; sometimes we do not like it. Without an identity or a sense of belonging, we are often lost or confused or feel marginalized or discriminated or depressed. Our identity is a means to try and understand ourselves, the society we live in and work, the world around us and give some meaning and useful purpose to our lives.

As immigrant, each one of us has 3 important identities; national identity as Canadian citizen, values and ethnic identity of ancestral root, such as Bangladeshi, Indian, Pakistani, Somali, Arab, African, Caribbean, or Chinese, etc.  and religious identity, Christian, Muslim, Hindu, Jews, etc.  In Canada, our new adopted country, we are law abiding Canadian Muslims. Unlike many countries, Canadian charter of rights guarantee us to preserve our Islamic identity.

Assimilation, Isolation, Integration and Multiculturalism: Assimilation, when one abandons his/her own cultural habits and values to be accepted by the new adopted country and the ambition is to become accepted as part of the main stream culture. In isolation, an ethnic group focus on keeping their culture and values in ghetto area and avoid contact with the majority culture. In integration, ethnic immigrant groups preserve the religious, cultural, and linguistic identities and also fully participate in the adopted country’s culture, language, and political activities.

In Canada, multiculturalism maintains and permits pluralist religious expressions and diversity of cultures; accepts and accommodates immigrants of different ethnicity.

First generation immigrant Canadians, more strongly identify with ancestral root than next generations born in Canada; they develop a hybrid identity, where primary focus becomes to the main stream culture with an influence by parents to maintain ancestral cultural identity. The new wave of immigrants, with distinct ethnic, cultural and religious identities, moved into major Canadian cities. They started interaction with each other at schools, playground and work place, hence integrated with main stream culture but kept strong ethnic and religious identity.

Muslim identity: Muslims are preserving identity; maintain a strong relationship with Almighty God through knowledge of the Quran and teachings of prophet Muhammad (PBUH), establish regular salah and differentiate between right and wrong, maintain strong moral and ethical values. Maintaining Islamic identity, they are active in society on family and social issues, having a voice and organizing events, interacting, discussing and helping by volunteering in school, hospital, library and so on.  Muslims show positive behaviour to neighbours and work colleagues in actions,  not based on color, ethnicity or languages.

UMO-OG: After 2009 January Gaza war, we seized a challenging situation of  two conflicting fund-raising situations between HCI for Gaza victims and Bilal masjid for project. With one person representing, Ottawa masjid, another one representing Gatineau masjid and  third one, representing Jami Omer, and  fourth one representing SNMC, in February 2009, we formed the UMO-OG- United Muslim Organizations – Ottawa-Gatineau. It had ups and down, but now a well-established unity organization for 14 Ottawa Gatineau masjids. In 2016, during Ramadan, Federal govt accorded, the first formal Multi ethnic Iftar party at Parliament for Canadian Muslims and UMO-OG also accorded a reception to federal MPS at parliament hill after 2015 Federal election.

Ottawa Hilal Committee: Since 1996, when we moved to Ottawa, our children at school and we at work, had a constant worry, how to handle, different days of celebrating Eid and start of fasting in Ramadan. We ourselves had a vision, to work to have same day Eid and Fasting in Ottawa. When Imam Khalid became Imam of Ottawa Masjid in 2010, an Ottawa Hilal committee was formed and we used to represent SNMC. Obviously Muslim community was clearly divided on fiqh and ethnicity. The pressure to align with Toronto or Montreal Hilal committees were tremendous. Al-Hamdu Lillah, snmc played a middle ground role and kept focus to Ottawa only, and for the last 5/6 years, Ottawa Gatineau community has been enjoying same-day Eid and fasting, unlike Montreal or Toronto.

Unlike many other cities, Ottawa  having same day Eid and Ramadan, has a positive influence to 100,000 Ottawa Gatineau Muslims and also to the main stream community. School children are enjoying a formal Eid holiday and all families can socialize on Eid days and develop harmony among Muslims and Muslim organizations.

Imam Council: In 2011, we started to realize, that to smoothly handle, UMO-OG affairs as well as community needs of resolving family and youth issues, snmc needs to have its own spiritual leader, even though we had a part time musallah. We had a real challenge, while snmc needs fund for the masjid and community center, how we can convince the board and community to hire an imam. It took us a lot of wisdom and marketing capability; first to convince the board and then community for the need for an imam, who can help in fund raising and resolving family issues. In August 2011, SNMC hired a non-traditional imam.  The hiring of snmc imam, gave us an opportunity to form the UMO-OG Imam council. We were, in 2011, in a better position to influence UMO-OG by the spiritual leader and presidency. The imam council helped to bridge the gap on fiqh and ethnicity issues.

ILEAD (Islam, Lead, Engage, Achieve and Develop): Using UMO-OG, we tried to host few joint yearly conferences in 2009 and most notable was the  one organized in Nepean sports complex in June 2010, where over 300 youths, brothers and sisters joined, under the leadership of SNMC. In March 2013, Br Mohamed Javed and his family, invited us to a special meeting in his home, with few snmc volunteers with an idea of holding an annual conference by inviting noted speakers like Toronto RIS conference. We graved this opportunity and moved the bi-weekly meeting to SNMC Jockvale community center. We (snmc outreach coordinator, snmc president and snmc imam) visited all the UMO-OG organizations multiple times and by presentation could convince them to embrace ILEAD idea and to hold rotating meeting in each masjid and in 2013,  held first ILEAD  conference in Ottawa EY center.

It was an eye opening first joint conference by 14 Ottawa Gatineau Muslim organizations. In attendance were 3,000 Muslims with bazar, lectures, seminar and workshops along with 10 Federal MPs, local dignitaries and UMO-OG leaders and imams. In July 2017, 5th annual ILEAD conference was held again in Ottawa EY centre.

International Language Schools: In Ottawa by 2018 over 20 weekend Language schools are run by School boards compared to less than 10 in 19996. The immigrant children can learn  free,own mother languages Arabic, Bangla, Urdu, Hindi, Somali, Dari and other languages, where teachers salaries are paid by school boards.

Ethnic Muslim Service Organizations: Since 1996 to 2018, we have seen 20+ ethnic Muslim service organizations to help back home communities and to organize individual ethnic Muslim community, such CBET (Bangladesh), Hope (Somali), Algerian, Egyptian, Palestine, CAP (Pakistan), Indian, etc.  Aim is to organize each ethnic community to integrate with main stream community as contributing law abiding Canadian Citizens as well as when calamity strikes help the back-home community as well as some form of sustainable development.

Prophet’s Medina Model: In 600AD, Islam’s prophet Muhammed made Medina declaration, where he was the spiritual leader of Muslims but civil leader of Muslims, Jews, non-believers and idol worshippers. Everyone was under state protections and enjoyed security. Ottawa Gatineau Muslims are diverse and come from 60+ different ethnicities and follows different fiqh (interpretation of Islamic rules). They work as one integrated Muslim community under UMO-OG and integrated with main stream community and work, play, study volunteer and live peacefully as law abiding and contributing Canadian citizens with strong moral and ethics. We live and  will die fulfilling God’s mission with a purpose in life as contributing and peaceful law abiding Canadian Muslims.

Marketing and Social Media manager at CBET: Apply by Wednesday November 24 2021 to info@CBET.ca