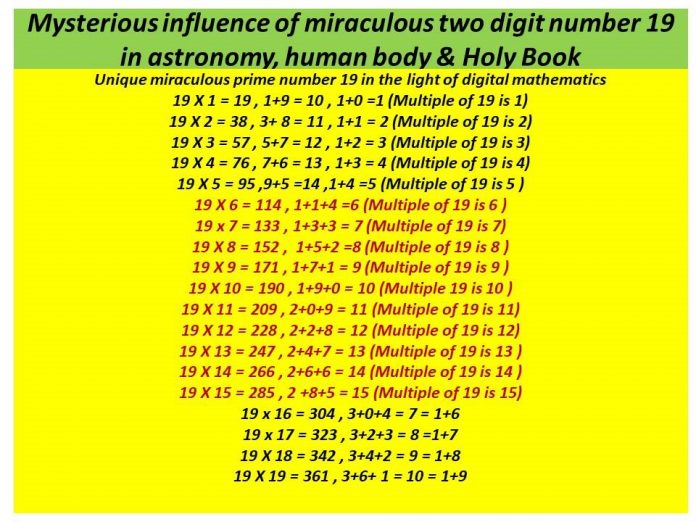 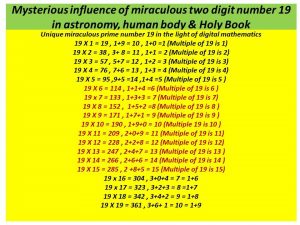 Sura Muddaththir  74 /30 There are 19 in charge of it. Sura 74/31 We have appointed  angels to be warden of fire. We have specified their number only as a trial for those, who are bent on denying the truth, so that those who were given the book might gain in certainty and those who believe might increase in faith and so that neither those who has given the scripture, nor the believers might have any doubts, and those sick at heart and those who denies the truth might ask, what does GOD mean by this parable ? In this way, GOD lets go astray, whom He wills , and guide whom He wills. And none knows the forces of your LORD, but He. This is but reminder for man.

Sura named by Mary (pbu) or mother of Jesus (pbu) has been placed in chapter 19 (A two digit number having hidden miraculous characteristic ) in Holy Quran as Mary (pbu) is an unique virgin holy  woman among all the woman of the world who gave birth to a  son miraculously. Also appearance of Holy Spirit (A miraculous character ) & announcement about miraculous birth of a child by a virgin woman has been also placed in verse no 19 of sura no 19. Name of Jesus appeared in Sura Maryam one time only at 19/34 which occupy 19th position also with respect to total 25 times appearance of  name of Jesus  in whole book .  So the above placement of verse 19 in chapter  19  &  19th   times  mentioned name of Jesus with respect  to whole book  in same sura no 19  can be defined as  coordinate x, y, z in the language of geometry  19/19/19 is a strong evidence about virginity of  Mary (pbu) who gave birth to  a  holy child miraculously as the holy  prophet (Muhammad) through whom Hoy Quran appeared was an unlettered prophet who was not acquainted with hidden  miraculous characteristic of number 19 & digital mathematics that has been discovered  & developed recently.  (In whole Quran in total Jesus has been mentioned 25 times, Adam 25 times, Muhammad  5 times, Abraham 67 times, Moses 135 times, Mary 34 times . Name of Adam appeared in Sura Maryam one time only at 19/58 which  also occupy  the 19th position  with respect to 25 times appearance of Adam’s  name in whole book  as creation of Adam & Jesus is similar according to Sura 3/59. The above pattern of counting is possible only after the invention & development of computer only at present but it was not possible  at ancient time means not before 1400 years . )

Miraculous birth of a  holy child by a virgin holy  woman has been described from 19/16 to 19/34 that   also includes exactly 19 verses which has been started by mentioning  the name of Mary & also ended by mentioning  her name where GOD has changed the normal law of human production. For more  examples  Adam was created without male, without female (Sura 3/59), Eve was created without female or from  male (Adam) only , Jesus was born from female (Mary) only  (Sura 19/16-34) &  rest of all other human being has been born from male- female pair.

Sura Maryam 19/35 It does not  befit the majesty of GOD, that He should beget a Son. Glory to Him ! He is far above that. When He decrees something, He says , only, “   Be“ , and it is. Verses  from Old Testament (Jewish Scripture) which is compatible with Sura 19/35 Numbers 23/19 God is not a man, nor a son of man. Exodus 20/3 You shall have no other gods before me. Verse from New Testament (Christian Scripture) John 5/37 (Jesus told) You have never heard his (GOD’s voice)  voice nor seen his form (Image of GOD).

Sura  Anbiya  21 /91 Remember the one who guarded her chastity, so We breathed Our Spirit into her, and made her and her son a sign for all people.

The above statement is compatible with the data  structure of Holy Quran where all the women’s name except (Mary-pbu)  from the beginning of human civilization including  famous woman like  name of Eve ( wife of Adam – pbu ), name of Sara (Wife of Abraham-pbu ), Rebeka (Wife of Issac –pbu ) etc , mother, wives &  daughters  of  last prophet Muhammad (pbu) etc  does not appear even single time in the book or absent there.

In every 19 years or every  19 rotations of earth around Sun , the Earth & Moon occupy same  position which is known as ecliptic cycle that  is not related to Earth alone but to earth & Moon system  together &  is also  a miraculous coincidence.

After every 76  (19X4)  years Halley’s comet passes through a route very close to Earth.

More examples of   19 that exist  in nature & Last Holy Book ,  can be represented here  , which is the beyond the scope of this text.

The  miraculous two digit number  19 which occupies position  in the form of  invisible  mysterious & amazing  pattern of data  in  Last Testament or  Holy Quran is the hidden  mathematical signature  from Almighty GOD or   LORD of the Universe .

Sura  Al Shu ara 26/192 This surely is a revelation from LORD of Universe. 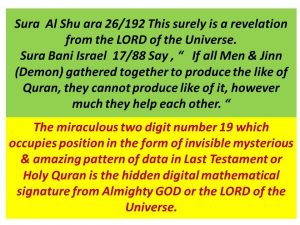 Sura Bani Israel  17/88 Say , “   if all Men & Jinn (Demon) gathered together to produce like of Quran, they cannot produce like of it, however much they help each other. “

Marketing and Social Media manager at CBET: Apply by Wednesday November 24 2021 to info@CBET.ca