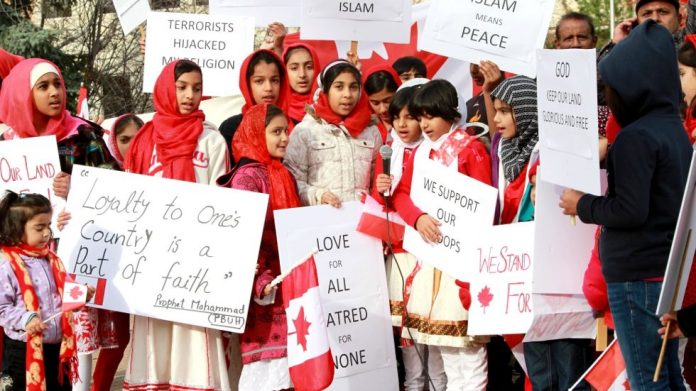 It was an unforgettable experience – several neighbors stood at the oldest mosque in Ottawa to welcome worshippers as they came for Friday prayers. This was a year ago when a disturbed youth had burst into a mosque in Quebec and opened fire, killing six people and wounding 19. On the anniversary of the attack, functions were arranged throughout Canada in solidarity with Muslims.

It was the first time in Canada that innocent people were attacked in a house of worship. The incident shook Muslims, and other Canadians, and reminded them that racists, bigots and unstable people remain a threat.

Canadian authorities at all levels condemned the attack and described Muslims, in the words of Prime Minister Justin Trudeau, as “an esteemed part of all our communities.”

Quebec police charged 27-year-old Alexandre Bissonnette with six counts of murder and five counts of attempted murder. He reportedly dislikes immigrants though he is the son of an Algerian immigrant and a French Canadian mother. The strife in his family life led Bissonnette to take the family name of his mother rather than that of his father. A neighbor described him as “very solitary” and “very anti-social.”

This suggests that the crime had more to do with the life of a disturbed youth than with Islamophobia.

This is not to deny that racists are active and that the Islamophobes were emboldened by former Prime Minister Stephen Harper’s and US President Donald Trump’s attacks on “Islamism.” Observers also state that Islam’s image in Canada is damaged by the horrors committed by Daesh (the self-proclaimed IS) or the authorities in countries such as Syria.

In Canada reports suggest that what riles some Canadians is the use of niqab by some Muslim women. These are relatively few but they lead to charges that Muslims are “imposing Shariah” on Canadians.

Most Canadians, according to polls, remain friendly to Muslims. But the Angus Reid Institute, which conducted a poll in partnership with Faith in Canada 150, reported that 46 percent of respondents said Islam is damaging to Canada compared with 13 percent who said it is beneficial. The same poll suggested that 49 percent of Canadians said that women in niqab should be denied government services.

The attack on worshippers, while shocking, is not the only cause for concern. There have been physical attacks on some women wearing the hijab and mosques have been desecrated. However, synagogues have also been defaced and Jews and Sikhs have also been targeted.

The point, however, is that racists and bigots are relatively few but active in Canada and most Canadians remain welcoming.

Acts of terrorism have been a part of Canada’s history, but they are rare. In 1985 an Air India plane was bombed.

“Azzedine Soufiane. Mamadou Tanou Barry. Khaled Belkacemi. Aboubaker Thabti. Ibrahima Barry. Abdelkrim Hassane. Let’s remember their names and where we were when they died. And let’s make sure we hold ourselves accountable to take all steps required to address the hate that killed them.” So said Renu Mandhane, chief commissioner of the Ontario Human Rights Commission, about the Quebec attack.

Aymen Derballi, father of three, was among the victims in Quebec. He was partly paralyzed. More than $300,000 has been donated by Canadians and Americans to help him acquire a dwelling that is better suited to his disability. DawaNet organized the $400,000 fund-raising campaign.

There are signs that Muslims themselves, who used to focus solely on building and maintaining mosques, are now broadening their activities to interact more with their fellow Canadians of other faiths.

Some years ago a Muslim Coordinating Council was formed in the national capital region which brings Sunni, Shia, women’s, students’ and ethnic organizations together to try to assist the neediest in the community and also to build trust and friendship with fellow Canadians. The council continues to make progress, though slowly.

Muslim leaders generally focus on their own organizations and religious programs and do not work with other Muslim organizations, let alone those of other faiths, to handle common problems. Perhaps the attacks, such as the one in Quebec City, will broaden their mental horizons.

Anniversary functions were held in Canada and involved leaders of most religions. Imam Sikander Hashmi of Kanata Muslim Association said: “What must not be forgotten is the love and support and solidarity we witnessed in the days following that terrible day and the love and solidarity we continue to witness today. For that, we are eternally grateful.”

In addition to being grateful, Muslims will have to become more sensitive to the challenges they face and will have to act more energetically to meet them.