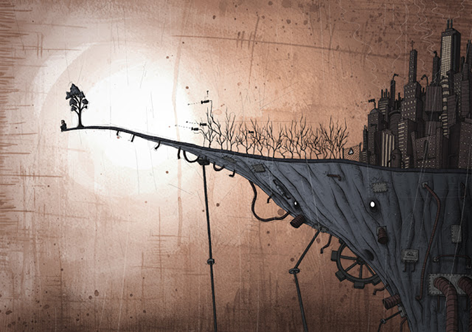 On solitude and inward states of being,  S N Smith, Ottawa

Many people become upset with what is taking place around them and they choose to retreat into their own cloistered existence because they simply cannot take the pressure and the pain of what they are witnessing. They reduce human contact to a bare minimum and seek to avoid too much stimulation with a view to maintaining self-protection and self-preservation. Such people are very sensitive to criticism and can be offended very easily, even when a comment directed at them may appear innocuous. Others may dismiss this as being an overreaction, and even childishness, but the affected person takes these matters very seriously.

The various debates, discussions and disputes which take place within communities and the wider society can be too much for such people and they feel compelled to pull back as they are simply overwhelmed by it all. They also cannot tolerate listening to or reading too much disturbing news and may choose to avoid it altogether. Thus their lives can be characterized as one of isolation and a desire for minimal amounts stimulation.

One must be careful not to judge such people because we all react to outward stimuli differently. In addition, we must keep in mind that we don’t have the same histories and psychological profiles which cause us to react in a variety of ways. Many people, for example, are introverted — shy and reticent — and thus find human contact quite exhausting. Even many people who appear to be extroverted are many times putting on an act and when they return to their solitude they feel drained and vow not to see anyone else, unless necessarily, for an extended period of time.

There is nothing wrong with such people, despite the propensity for the medical profession to pathologize their condition, and they may actually be happy with the choices they have made even if those around them don’t fully understand. Yes, they miss out on many enjoyable or pleasurable things in life, but they may feel the price is worth it in the long run. Pain avoidance is a huge motivator.

When discussing this issue, one should make a distinction between behaviour and inward states of being. Behaviour refers to how one acts or performs in a given situation and, in many cases, may have little to do with how one is feeling or perceiving a given situation on the inside. It is like putting on a peformance or playing pretend in front of an audience and when there is no audience one behaves in a completely different way. Everyone does this. But inward states of being refers to who one really is on the inside, which is not always easy to pin down because people practice so much self-deception as well as deceiving or misleading others, which may or may not be intentional. I see all this as a form of self-preservation in response to an inward fear of exposing one’s true self to others and thus making themselves feel vulnerable.

It is a fact that God has created each one of us differently and we cannot all be outgoing or leaders and the recipients of many accolades or criticism. Many simply do not want to be noticed or be too engaged at all. That is the way they are and we have to respect their choices without looking down on them.

The author, who enjoys his own solitude, can be reached at: shawnsmith1964@gmail.com