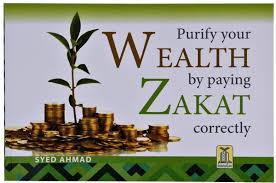 Next to Salah, Zakath( the poor dues)is the most important pillar of Islam.

Salah and Zakath are often mentioned together in the Quran.

Like Salah, Zakath is a manifestation of faith that affirms that God(Allah) is the sole owner of every thing in the universe, and what men hold is a trust in their hand over which God( Allah)made them trustees to distribute as He has ordered.

Believe in a allah( swt) and His messenger and spend of that which He made you trustee. ( 57:7).

In this respect Zakath is an act of devotion, which like prayer, brings the believer nearer to his Lord.

Apart from this, Zakath is. Means of redistribution if wealth in a way that reduces differences between classes and groups, it makes a fair contribution to a social stability and brings wealth back into the economy of the community. By purging the soul of rich from selfishness and the soul of the poor from envy and resentment, it prevents the channels leading to class hatred and makes it possible for the springs of brotherhood and solidarity to gush forth. Such stability is not merely based on the personal feelings of the rich but stands on a firmly established the truth, which if denied by the rich, should be exacted by Force, if necessary.

Zakath is obligatory only for those

persons who posses wealth at least

equal to Nisab( limit). Nisab is the minimum amount of wealth on which Zakath amount must be paid. If someone possess an amount less than Nissb then he/ she does not have to pay Zakath.The Nisab for gold is 3 OZ; and for silver is 21 OZ The Nisab for cash is the equivalent to that of gold or silver, which ever is less value.( Nowadays the Nisab got a silver less so cash should be calculated according to the value of silver).

The Nissb for inventory is calculated

As the same as the Nisab for cash.

The assets on which Zakath are FARD must be in one’s possession for at least one lunar year. Zakath is not required on items of personal use(cars, clothes, and household items, etc), or houses and land. In business, Zakath is not FARD on property tools & equipment.

Hoping the above article will help

Compilers of Book series “our life in the light of Islam.

Author of several books on Canadian

Author of several books on Finance &

Trials and Tribulations in Human Life: Lessons from the Story of...

Please write for April 2022 Issue of CAD Dream by April...