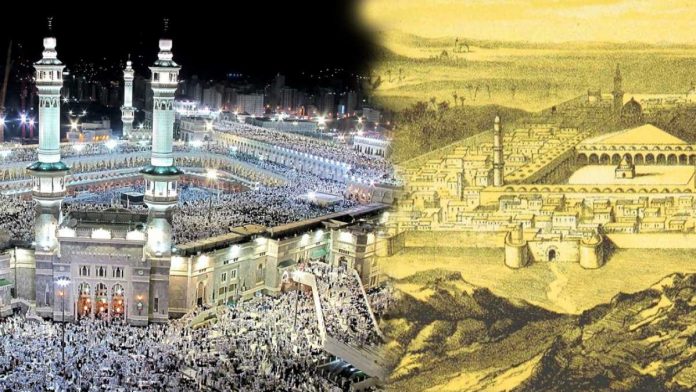 Modern Challenges to the Spirit of Hajj, Islami City

There was a time when people would spend months and months preparing themselves financially and spiritually to live the real meaning of Hajj. However nowadays Hajj is offered as a holiday package.

Many Hajj agencies all over the world offer value packages with super programs, deluxe programs and short executive program. These programs offer the best and closest accommodation in Makkah and Madinah, best available food and best possible position in the House of Allah.

Depending how much you pay, you can get the finest place in Makkah and Madinah. If you happen to be the guest of royalty, then probably, no one can ever compete with your placement in the two mosques.

When the Prophet performed his only Hajj, the only provision that he had with him was worth of no more than four dirham as narrated in several books of ahadith.

Hajj was meant to teach the pilgrims endurance and perseverance for higher causes, yet it has been turned into an exercise in convenience. Hajj was meant to express the utmost humility in the presence of the rest of humanity by declaring that “Here I am, Here I am, I will not make anyone Allah’s partner. Allah is the one who is in control of everything and He alone is the one who is the source of all blessings and praise.” Yet, today, Hajj, for many has become, a badge, a symbol of spiritual pride.

Hajj is an institution that is supposed to reassure the people that ethnic, cultural, linguistic, geographical, wealth-based, race and color differences that humans have imposed upon themselves have no reality in the presence of God. All are one and the purpose of all is to follow the divine guidance to create a universal humanity to the well being of everyone. Hajj is meant to be a pledge to live the example of Hajj beyond the Hajj. It is an occasion to create a personality without dimension and space.

Yet, through social engineering and manipulation of resources, Hajj is rapidly adapting social elements that distinguish the rich from the poor, the very institution that it is supposed to demolish. Divisions among pilgrims on the basis of their ethnicity and money are visible throughout the Hajj journey.

The Quran describes Kabah as a center of guidance to humanity: Indeed, the first House [of worship] established for mankind was that at Makkah – blessed and a guidance for the worlds. (Aal Imran 3:96)

The place was not only a place for bringing together all the people but it is a center for promoting peace. (Al-Baqarah 2:145). It was a place that was meant to help humanity realize its universality rather than divisions (Al-Ma’idah 5:97)

For this great purpose of helping humanity realize its dream of removing all the differences and divisions among themselves the institution of Hajj come up with the clear example of making us understand and observe that unity of humanity is possible. For this the Quran asked Prophet Ibrahim to invite people to Hajj, so that they may witness the beauty and magnificence of the guidance of Allah.

Hajj is like a united nations in its real sense without the five elite powers. With no hidden agenda and security council privileges, each nation and community comes to Makkah with the single purpose of serving God and reiterating their covenant with Him.

Hajj provides the opportunity to everyone to witness the common bonds among people regardless of their differences. Hajj promotes the idea of dignity of human beings, male or female, young or old and rich and poor.

Hajj also creates space for intellectual ideas among people so that they could all remain focused on their main agenda of serving humanity by following the guidance of God.

However, among all this razzmatazz, still there are people who come to Hajj to take the inspiration to transform themselves for a better future both for themselves and for others. They are the ones who do not care about big hotels or better facilities. They are the ones who spend their days and nights in Mina, Arafat, Muzdalfah, Makkah and Madinah.

Here they remember the covenant that Allah made with Prophet Abraham, the builder of Kabah. Prophet Abraham was told by God, Almighty: Indeed, I will make you a leader for the people. (Al-Baqarah 2:124).

Encouraged by this honor, the Prophet asked: “And of my descendants?” [ Allah ] said, “My covenant does not include the wrongdoers.” (Al-Baqarah 2:124)

In these simple words thus was described the real intent and purpose of the Hajj and all other faith-based institutions. The dignity and honor does not come with buying this or that package. It comes through dedication and commitment to the divine values and living up to them.

Someday, the Hajj will be restored to its original intent by those unknown and unrecognized faces who come from all over the world quietly without any fanfare and who spend every moment of their presence in the noble sanctuaries and the pilgrimage path with the determination to follow their real leaders: Prophets Ibrahim, Ismail and Muhammad (peace and blessings be upon them) in every aspect of this great institution.

The re-enactment of acts performed during the Hajj are attributed to Prophets Ibrahim and Ismail and Mother Hagar. They are primarily meant for the purpose of reminding humanity that in order to bring people together, God’s guidance is received, acknowledged, accepted and followed by a small group of people who may not be present physically to see the fruits of their efforts. Prophet Ibrahim created that nucleus for perpetual change in human behavior and for that he was honored by God who declared him as an Imam (role model) for humanity.

Getting Ready for Hajj – Physically, Mentally and Spiritually

Hajj: The Greatest Movement for Peace

Hajj and Kabah Connecting the Believers

Hajj in the Bible

The Story of Ibrahim

QURAN: The time when the real value of things will be...