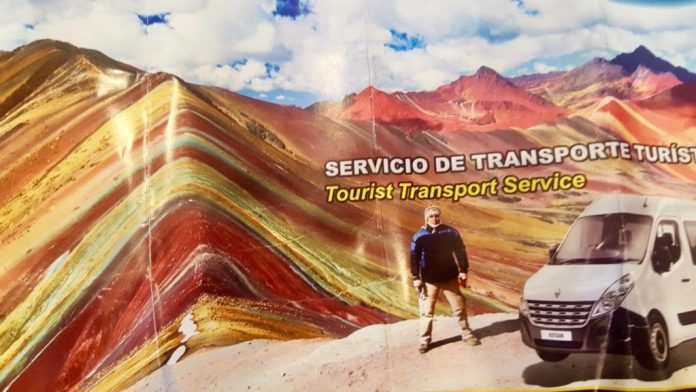 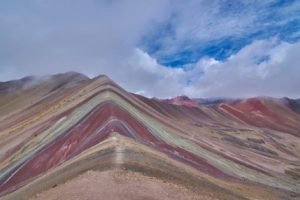 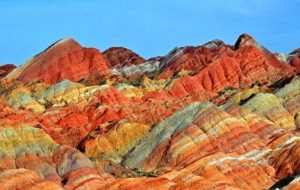 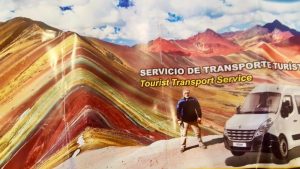 Sura Fatir 35/27 Did you not see how GOD, sent down (Arabic- Anjala ) rain (Arabic – Ma-an)  from sky ( Arabic Shama –e), from which we bring forth fruit (Arabic-Shamaratin) of diverse (Arabic- Mukhtalifa ) colours ( Arabic -Al wanuhu). In the mountains ( Arabic- Jibali) there are streaks of various shades of white (Arabic-Be-eda) and red (wahumru) and jet black  ( Arabic-Shudu) rocks. Sura 35/28 In like manner , men beasts and cattle have their diverse hues too.. only those of His servants, who possess knowledge, fear GOD. GOD is Almighty and most forgiving.

The  mountains  having coloured  streaks shade is known as rainbow mountains. In the first part of verse it has been mentioned that “Did you not see how GOD , sent down rain from sky, from which We bring forth fruit  of diverse colours” which may be considered as hidden indication of comparison with  rainbow in sky.  In second part of verse it has been mentioned that “ in the mountains there are streaks of various shades of white and red and jet black rocks “ which is hidden indication of Andes mountains of South America where rainbow mountains of Peru are located. Any how   the mountains having different attractive  colours shade has been discovered in both  China & Peru of South America  . These natural site  has been opened recently  for tourist visit with an aim to have financial gain . The coloured mountains of China are located on western side  of China which has probably came to the knowledge of the people inhabitant of  Eastern side after it has been opened for the tourist of the World as the distance between East & West border is 5000 Km. In fact most of Chinese people lives on Eastern side of the country due to comfortable climate resulted from flow of hot  surface current in pacific Ocean which is very close to Eastern coast of China.   If the distance from Eastern coast is increased towards west the uncomfortable hilly area appears instead of comfortable plane land  &  temperature is  decreased dramatically  or climate becomes  severe  cold due to absence of mountains on the northern side of the country  that  results from  flow of cold air from  Arctic Ocean  which also  causes very low density of population in the western area. The telecommunication, easy  road communication in between eastern &  western  side of China  has been developed  in this century  only .So Inhabitant of Asian people outside China has got very little opportunity to know about the existence of attractive coloured mountains   in the past or before the opening  of this spot as a  tourist destination.   Also  coloured mountains (A part of Andes mountains ranges )  in Peru of South America was unknown to  the people of Asia, Europe etc   until the discovery of America in 1492 & afterward the rainbow mountains located in Peru  has been opened for tourist visit  The  existence of coloured mountains in the World has been mentioned in Sura Fatir 35/27 of Holy Quran  & the Book appeared to human being through an unlettered prophet in 600 Centaury. This can be considered as another example of representing scientific data about Nature & Universe ,  like existence of invisible Oxygen (Sura 6/125) , invisible  Nitrogen (Sura 30/19,30/24) in atmosphere, existence of  hole in Ozone layer (Sura 77/9, 82/1,84/1,55/37), invisible event of expansion of Universe (Sura 51/47) ,Shifting of all  Galaxies  backward (Sura 81/15, 81/16) existence of invisible insurmountable  barrier where water from two different Oceans meet together(Sura 25/53), invisible seven layers , (Stratosphere  , Troposphere, mesosphere etc. ) in atmosphere (Sura 78/12) , Ocean current at a depth of 5 Km under its surface (Sura 24/40) , long deep root of mountain under Earth surface (In case of Himalaya the  length of mountain  root is ten times more  than its  height) etc . (Sura 78/7), which has been mentioned in different verses of different Sura in Holy Quran.

More Angst about the Parent and Grandparent Sponsorship Program – Is...

Growth of Ottawa as a Mega City with Million Plus, Councillor...

The Difference Between Winning and Losing, Dichter’s Blog via Masuma Khan