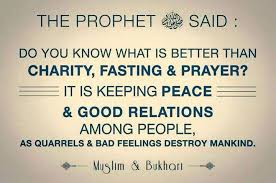 This is part of a series of short articles on a variety of topics which do not go into a lot of details but merely introduces a germ of an idea which readers can investigate further on their own. Note, I am always careful to refer to authentic sources.

I am obsessed over how much we are influenced by our social environment, the mass media, the entertainment industry and the people we associate with on a daily basis. At one level we Muslims claim, at least with our mouths, to be believers in Allah and the Day of Judgement, and say we take the prophet Muhammad (pbuh) as our ultimate example in all that we do in life. But we are very much exposed to a host of influences which draw our attention away from our true life purpose, which is to worship and serve Allah, and instead internalize those societal values in circulation, as well as act in such a way that runs contrary to the teachings of Islam.

How far are we away from what Allah wants for us? I think the true answer to that question is frightening.

I am not going into a long lament about our situation, but I want to leave you with this statement from ʿAlī ibn Abī Ṭālib who is reported to have said, “He [the prophet] was the most generous of people, the most truthful of the people in speech, the gentlest of them in temperament, and the noblest of them in social affability. If someone saw him unexpectedly, he was awestruck by him, and if someone associated with him knowingly, he loved him. . . . I have never seen the like of him, either before him or after him.”
I was thinking about this above statement, as well as the many Quranic verses which remind us that the prophet (pbuh) is our example of conduct. (See for example 33:21, 31; 4:59, 83; 24:63 and 6:84)
And then I was thinking about what his (pbuh) first wife Khadijah (may Allah be pleased with her) had to say to him by way of encouragement as the first of the revelation began to descend on him (pbuh) and he (pbuh) was frighted and confused. She consoled him (pbuh) by saying: “Do not worry, for by Him who has dominion over Khadijah’s soul, I hope that you are the Prophet of this nation. Allah would never humiliate you, for you keep good relations with your kith and kin, you are true to your word, you help those who are in need, you support the weak, you feed the guest and you answer the call of those who are in distress.”
What faith she had in her husband!!!
Are we generous, or have we internalized the values of greed and selfishness that this society breeds?
Do we support those in need or forget about them altogether?
Do we side with power, in our question for social status, or do we support the weak when they call out for help?
Are we generous to our guests? Do we even invite people to our homes to begin with?
Do we reach out to those in distress or just look the other way as if such people did not exist?
Do we keep good relations with our families, or do we forsake our them and stop speaking to them altogether?
Are we truthful in our words and deeds, or are we simply liars and dishonest people who think nothing of cheating someone in order earn a living?
Abdullah bin ‘Amr bin Al-‘as (May Allah be pleased with them) reported: A man asked the Messenger of Allah (pbuh): “Which act in Islam is the best?” He (pbuh) replied, “To give food, and to greet everyone, whether you know or you do not.” [Al-Bukhari and Muslim].
Do we do this? Do we give food to our neighbors and to others in need?
When we go to the Mosque or meet other Muslims in public, do we say salam to only those we know? If so, how does that exhibit following the prophet (pbuh)?
Further, Al-Bara’ bin ‘Azib (May Allah be pleased with them) reported: “The Messenger of Allah (pbuh) commanded us to do seven things: to visit the sick, to follow the funeral (of a dead believer), to invoke the Mercy of Allah upon one who sneezes (i.e., by saying to him: Yarhamuk- Allah), to support the weak, to help the oppressed, to promote the greeting of ‘As-Salamu ‘Alaikum’, and to help those who swear to do something to keep their oaths.” [Al-Bukhari and Muslim].
Do we do any of this?  That is a serious question and not a rhetorical one.
Abu Hurairah (May Allah be pleased with him) reported: The Messenger of Allah (pbuh) said, “By Him in Whose Hand is my life! You will not enter Jannah until you believe, and you will not believe until you love one another. Shall I inform you of something which, if you do, you will love one another? Promote greetings amongst yourselves.”

By Allah, we are not behaving as if we loved one another. We are, in fact,  behaving in a totally opposite manner. We are cold and indifferent to one another and have little mutual respect or affection because we act like the people around us and take our lessons from them.

What an example we have before us!!!

What we need now are living examples of people who follow this prophetic way, for Islam cannot be simply learned from books but must be transmitted by those who act as examples of how to put the prophetic sunnah into practice in everyday life. Ideally, Mosques and Islamic institutions should fulfill this role by creating an environment of iman (faith), but it has not been enough because there are so many other influences weighing on all of us.  Now, more the ever, we need to create an environment in which our faith is strengthened and nourished to act as a counter weight to the environment of disbelief we live in. Sadly, we are so immersed in the problem that most of us cannot even recognize it.