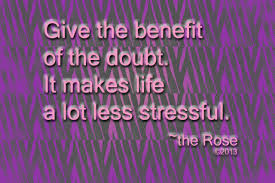 Giving people the benefit of the doubt, By S N Smith, Ottawa

In this brief article I wish to discuss how we arrive at conclusions about some things or someone, as well as the consequences of engaging in this type of activity.

It never ceases to amaze me the flimsy “evidence”  people use to arrive at a conclusion about others or the cause of unfolding events. It’s like an entire mountain being held up by a single grain of sand. We build up a whole story around a few scattered pieces of information and glue to them together to create a narrative.

As a result of this, we hurt people, unfairly malign them and make unwise decisions because our assumptions rest on an unstable foundation.

The stories we tell ourselves about others are nothing more than phantasms — harmless apparitions we saw as children as we trembled in the darkness.

But the consequences of those stories  are not harmless and can inflict real damage on ourselves, on others and on the societies in which we live.

If we hear a person saying something  or see them engaging in  an activity, that does not mean we have them all figured out and thus can judge them or state with confidence we now know who they are or how they think. For who amoung us are consistent in our actions? Who of us would wish to be characterized based upon something we said or did in an isolated context? We would cry foul and insist that this is unfair. And yet we do that all of the time to other people, don’t we?

Allah says in in the Quran,

“O you who believe! Avoid much suspicion, indeed some suspicions are sins. And spy not, neither backbite one another. Would one of you like to eat the flesh of his dead brother? You would hate it (so hate backbiting) . And fear Allāh. Verily, Allāh is the One Who accepts repentance, Most Merciful” (49:12)

This verse tells us that we should leave people alone and not make up things about them, or be too inquisitive about their personal dealings. I personally never ask a person what they do for a living because maybe they don’t want me to know, or they may be unemployed and are embarrassed about it.

Whatever people do in their private lives is none of our business, unless they want to share it with us. Furthermore, we should avoid seeking to characterize people based on scattered bits of information glued together, but instead give them the benefit of the doubt. This practice is better for us, for others and the wider society in which we live.

What we hold to be true must be based on something more solid than the workings of our imaginations. And if we cannot do better than that, then we should just remain silent.

QURAN: The time when the real value of things will be...

Quote: And We have indeed made the Qur’ân easy to understand and...

The Spirit of Giving in My Heart, by Delwar Hossain