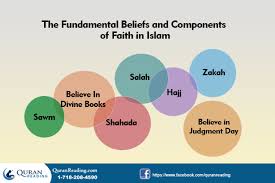 The second fundamental:Knowledge of Islam through evidences:

This knowledge consists in the submission to Allah as one Allah (God), yielding to Him by obeying His commandments:

This knowledge is of three ranks:

Each of the above ranks has its pillars

The first Rank:Islam: it has five pillars

Mohammad is His Messenger.

D.Fasting during the month of Ramadan.

E.Pilgrimage to the sacred sanctuary of Allah.

Evidence for the unity of Allah from the Al-Quran:

(Allah testified that there is no god but He, and

This means that it is only Allah that is worthy of

Evidence from the Al-Quran that Muhammad is

The Messenger of Allah:

( Indeed there has come unto you a messenger from amongst yourselves; it grieves him that you

Suffer adversity and he is heedful of your welfare

and to the believers he is compassionate and merciful.) 9:128

To testify that Muhammad is the messenger of Allah signifies that one should obey his ordinances and believe him in what he tells, avoid that he prohibits and worship Allah according to His precepts.

Evidence for prayers and ZAKAH and meaning of

Unity of Allah from Al-Quran:

(And they have only been commanded to worship Allah as dedicated and devout monotheists and to perform regular prayers and to pay the ZAKAH. That is indeed the true and sound religion.) 98:5

Evidence for fasting from Al-Quran:

Evidence for pilgrimage from Al-Quran:

(Allah has ordained on all people the pilgrimage to His house for those who are capable of performing it. And if some turn away in disbelief,

IMAN comprises more than seventy branches, the highest of which is to testify that there is no god except Allah and the lowest is to remove any

Obstacle from any path. Modesty is one of the branches of IMAN.

The pillars of IMAN are six:

2.Belief in His Angels

3.Belief in His Books

4.Belief in His Messengers

6.Belief in Destiny; good and bad

Evidence from Al-Quran for the six pillars of IMAN:

Righteousness is not to turn your face to east or

the west but righteousness is to believe in Allah

and the last day and the Angels and the book

and prophets, and out of the substance you cherish to give to your kins and orphans and the needy and the wayfarer and beggars and to the

freeing of slaves, and to observe regular prayers

and give ZAKAH and to keep your word once it is given, and to be patient and resolute in the face of adversity and peril, and war… verily these are the righteous and God Fearing)2-17

Evidence of destiny from Al-Quran:

(Indeed, anything we have created is according to proportion and measure.)54.49

The Third Rank:IHASAN( perfection of worship):

IHSAN has only one pillar and that is that you must worship Allah as if really you see Him:

for though you do not see Him, He sees you.

(Indeed Allah is with those who fear Him and

(Put your trust in the Almighty, the Merciful: for

( whether you are dealing with a business of your

own or reciting the Quran or performing any deed: we would always witness what you are doing.) 10:61

Evidence from the Hadith is the well-known Hadith of Jibril(p.b.u.h):

According to Umer ebn al-khattab “the blessing of Allah be on him.”

Once while we were sitting with the prophet ( the grace of Allah and peace be with him), when there came upon us a man with snow- white clothes and jet-black hair, with no traces of any travelling on him, yet he was a complete stranger

to all of us, then he sat before the prophet with his own knees parallel to his knees and his hands on the thighs of the prophet, then he said,

“O Muhammad, tell me about Islam.” and the prophet said it is to testify that there is no god but Allah and perform regular prayers and pay the ZAKAH and fast the month of Ramadan and

perform the pilgrimage to the Sanctuary of Allah

if you can afford it.” Then the stranger said , “you

have spoken the truth.” We wondered why he asked him and told him that what he had said was true. Then again he asked “tell me about IMAN.” The prophet answered , “its us to believe in Allah and His Angels and  His books and His Messengers and the last day and in Destiny, good and bad, “

Then he asked. tell me about IHSAN” and the prophet replied. it is to worship Allah as if you are seeing Him for though you do not see Him,

yet he sees you.”

Again he asked, “Tell me about dooms day “.

needy shepherds vying with each other in erecting high buildings.”

When the stranger departed the prophet was silent for a while and then said , O Umar, do you recognize the questioner? We all replied Allah

and His Messengers  know better.”

“It is Jabril: he has come to teach you your religion.

Author of several bulletins & Tax letters on Canadian & US taxes.

Author of several books on Canadian & US taxes.

Of Canada. Advisory board member A.U.University

Recipient of service to Humanity award from

On the social context of dealing with others, S N Smith

Four Years After the Rohingya Genocide: The Crisis Continues

“No kind of Calamity can occur, except by the leave of...

Good news:CBET invites all Canadians with Bangladesh Connection to tell their...

Underneath which rivers flow: The Symbolism of the Islamic Garden, Islamica...

Muharram: The First Month of the Hijri Calendar