Prophet Muhammed(pbuh), son of Abdullah, son of Abdulmuttalib, son of Hashim, of the clan of Quraysh, one of the Arab Clans, the descendants of Ismail, the son of Ibrahim al- Khalil, (pbuh). 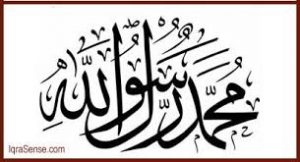 Prophet Muhammad was initiated into the prophethood with the revelation of these ayas which are the first portion of the Qura’n to be revealed:“ Read in the name of your Lord who created: He created man out of a clot. Read and your Lord is the mist Bountiful, he who taught with the pen: He taught man what he has not known” 97:1-5.

Later, Allah sent him as a messenger to warn the polytheist sand to preach the unity of Allah: “O you wrapped up(in his mantle) arise and warn ! Your Lord exalt, and your garments Purify, and abomination shun. Nor expecting giving any increase for yourself. And in the case of your Lord be steadfast.”74:1-7 arise and warn; means to preach monotheism and to warn against polytheism, exalt your Lord; means through testifying to His unity, your garments

Purify: means keep your deeds clean from Idolators and deny them.

He continued to preach the unity of Allah, for ten years, then he ascended to Heaven where, the five prayers (Salah) and their times were ordained. Thus, he performed the salah in Mecca for three years.

Then he was enjoined to emigrate to Al-Madinah. This Hijra means departing from among the Polytheists to settle with the community of Islam.

When the prophet settled in Madinah, other ordinances of Islam were prescribed : these include the ZAkah, Fasting , Pilgrimage, the Adhan ( call to prayers), Jihad(fighting in the cause of Allah) and the injunction to recommend good and to denounce evil. Thus, he remained in Madinah until he died ten years later, but his religion remains to guide the Muslim community to all the good and to warn them against all evil.

The good is the creed of monotheism and anything with which Allah is pleased and satisfied.

The evil is polytheism and everything that Allah dislikes and Allah has sent the Prophet Muhammad to all peoples and nations and He has ordained that all (mankind and jinn) should follow him in obedience to his message.

With him Allah brought His religion to its ultimate perfection.

EVIDENCE FROM THE QURA’N: (Today I have completed your religion and  bestowed upon you MY bounty and willed Islam to be your religion ) 5:3

EVIDENCE OF HIS DEATH FROM THE QURA’N: (Indeed you shall die and they shall die. Then On the day of judgment you shall have your  disputes in the presence of your Lord.)39:30

And when people die they shall be resurrected.

EVIDENCE FROM THE QURA’N: (From it (the earth ) we have created you, and

After Resurrection, they render account to Allah and they are rewarded or punished.

EVIDENCE FROM THE QURA’N: (To Allah belongs whatever is in the Heavens

and in the earth, He returns to those who did evil whatever they did, and He rewards

Allah has sent all the messengers to give good news and warnings.

EVIDENCE FROM THE QURA’N: (Messengers to give good news and warnings to mankind should have an argument against Allah after the coming of the Messengers.)4:165

EVIDENCE FROM THE QURA’N THAT NOAH is

The Muslims believe that all prophets of Allah are human beings, but God protected them from any mistake or fault. They have. Never made mistakes through their mission.

(And the apostles whom we sent before thee  were all (Men) who ate food and walked through the streets: we have made some of you as a trial for others: will ye have patience?For God is one who sees) all things)25:20

And we also have a deep respect and belief in all of them.

EVIDENCE FROM THE QURA’N: “The Apostle believes in what gathering been revealed to him from his Lord, as do the men of faith. Each one”of them” believes in God, His Angels, His books, His apostles.”

“We make no. distinction ‘they say’ between one and another of His apostles .”And they say: “We gear , and we obey : we seek Thy forgiveness, our Lord, and to the is the end of all journeys.”

To every nation from Noah, to Muhammad, a messenger was sent to command them to Worship Allah alone, and to interdict the worship if all idols.

EVIDENCE FROM THE QURA’N:(We have sent in each Nation a messenger to command them to worship Allah and to avert idols.) 16:36.

How Sustainable Eating Follows the Sunnah of the Prophet SAW (and...

Trials are a part of the life of this world, S...