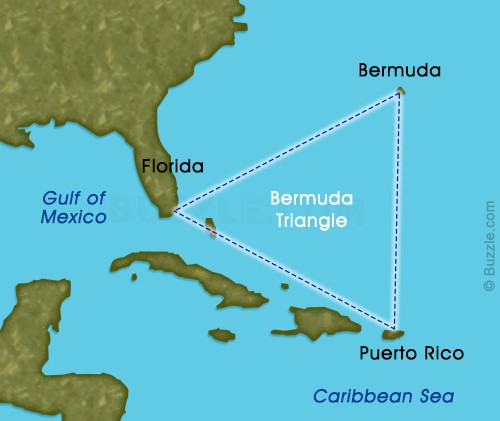 The analysis represented  here is  related to mysterious disappearance of  enormous  numbers of air crafts & ships from a triangular area known as” Bermuda triangle “ in Atlantic Ocean  near the south east corner of United states. The analysis may be partially correct or incorrect & it   is based on  complete logical imagination (which includes  numerous  chains of cause & effect ) from scientific data available in different branches of  science , like electro dynamics , magnetism, geology,  astronomy etc. The three vertices of triangle are Miami (A city in Florida) , Puerto Rico & Bermuda having lengths of triangle  as  Bermuda – Miami 1665 Km , Puerto Rico – Miami 1631 Km, Bermuda – Puerto Rico 1571 Km. Area of the triangle is in between   1300 000 – 3900 000 Km² (More than area of India) .  In total around 300 ships & 75 air crafts has been disappeared during the navigation of ships & aviation of air crafts  from this mysterious  area (also known as Devils triangle ) till today .

There are 1500 active volcanoes  that exist throughout the world & most of them are in Ocean Floor. A north south oriented chain of volcano is running through Atlantic ocean in between American continents & European- African  Continents & the region in the Atlantic Ocean near the south east  corner of   United States  which is identified as Bermuda Triangle exist very close to this chain of  volcanoes in  Atlantic ocean.. One of the function of these volcanoes is to reduce  pressure under Earth surface  by ejecting  enormous quantity of  lava from  time to time  which is composed of  solid rocks, dust, smoke, gaseous , liquid material etc having  very high  temperature  if the pressure crosses safe limit as the temperature at centre of earth is 5400⁰ C & Pressure is variable which  varies in  between  3300 000 to 3600 000 atm, . These volcanoes behaves like safety valve of a pressurised boiler & it prevents  such an  enormous explosion   that may  causes blown -up of Earth crust (Thickness -Continental crust 32 Km, Oceanic Crust 8 Km) into pieces. Most probably there are several number of gigantic volcanoes having enormous ejection capacity which can throw  volcanic lava more than 10 – 15 Km upward means project the lava in the zone of stratosphere which is considered as the the normal flying zone or aviation zone for air craft. After the ejection of lava several weeks abnormal air pressure, densities etc  may continue in this region which may result sudden drop of air pressure in some areas . Any air craft may face disaster during its movement through this region due to sudden drop  of air pressure & other abnormalities in this region.  Probably the volcanic lava is composed  of loadstone ,  or iron, Nickel, zinc or cobalt  etc (raw material to form permanent natural  magnet) which has been  flowed  in in ocean floor in enormous  quantity & occupy vast area & under a pressure more than  several 100 atm pressure, having temperature  1 to 4 ⁰C under an average  depth of 3 to 4 Km below the Ocean surface water , which may cause to form  very large solid permanent natural magnet there and  has got such a strong  magnetic field strength so that the  magnetic field is extended up to stratosphere. As a result of this situation  magnetic compass carried by a ship for navigation guide   may shows abnormal behaviour due to the influence of enormous permanent solid  natural  magnet , which has been formed by volcanic lava ejected from ocean floor. The  ejection of volcanic lava sometimes  may be accompanied by vast explosion if the ejected magma is very thick  which may develop sudden high pressure under oceanic crust due to insufficient or very narrow vent of volcanic eruption . All these factors may create turmoil , turbulence etc  in deep Ocean  water current , surface current of ocean or may raise water column having high height  or  mountain shape  wave having very high  height . If the ejected lava  includes  some material which after mixing with  water may causes the decrease  of density of ocean water temporarily at  this region in such a way so  that the weight of ship becomes more  than the weight of displaced water & all these factors together  may bring disaster to navigation of  ship.

Most probably on  the top of Atlantic Ocean the  area which is  identified  as Bermuda triangle in the level of Stratosphere means at a height of more than 10 km -15 km  height from Ocean surface water huge amount of electrically  charged particles/ions  has been concentrated which interrupt the transmitted   aviation signal  for the Air craft  flying in this zone. Possibly the charged particles appearing from outer space   are accumulated in this zone due to the influence of strong  magnetic field originated from permanent natural magnet developed at the bottom of Ocean floor. The origin of this charged particles is outer most sphere of Sun known as corona, which transmit charged particles from corona to Ionosphere/Magnetosphere etc , then from ionosphere to North pole, south pole of Earth ,  the  areas having strong magnetic field like region over Bermuda triangle & other regions of Earth where enormous magnetic field  strength exist.  During most of the time transmission of charged particles occurs by Capacitive action in a RC circuit. For example it can be considered that  a part  of Earth crust (Oceanic crust)  is a portion of spherical conductor & ionosphere is another spherical conductor & there exist 230 to 400 KV in steady state condition in between them  . Even  one billion volt may be developed  in transient state condition  specially  when thunderstorm  strikes  in between positively charged  cloud/air  & negatively  charged cloud /air  or positively charged cloud/air & negatively charged  ground in  troposphere  as a  result of  flow of charge in  RC circuit (Resistance- Capacitance circuit) where air/vacuum  e.t.c  are  separating  media having different permittivity at  different places , which provide different value  of  resistive path. Similarly in next stage  Ionosphere may be considered as one spherical conductor & Corona of Sun can be assumed as another spherical conductor where a small portion is air (several 100 Km) & another portion is vacuum (More than 90 Million miles )  behave as insulating media & provide resistive path in RC Circuit according to the equations , I = V/R  e ^-t/RC ,  v = V (1 – e ^-t/RC  ) . Here” v” is instantaneous voltage ,  “I” is instantaneous charging current, “V” maximum voltage (230 to 400 KV  in between  Ionosphere & Earth Crust) , “R” is resistance between two spherical conductor separated by vast  empty space, atmosphere etc , t is time constant, “C” is the capacitance between two spherical conductor.

Ionosphere is a composition of ions which has been formed by cosmic ray approaching from outer space , which  appears  at the outer most boundary of the  atmosphere where  it interact with particles there to form ions & fabricates the layers  of ionosphere. Although ionosphere has got maximum concentration of ions but it is distributed in all  other layers of atmosphere   which is gradually  reduced as it approaches  the  earth surface. Magnetosphere is formed by charged particles transmitted by capacitive action from corona of Sun towards Earth & it has been fabricated just  above Ionosphere . Charged particles are  also distributed in all the layers of atmosphere &  its concentration varies along longitude & latitude of atmosphere having maximum concentration at magnetosphere. The accumulation  of charged particles is very high on Ocean surface than accumulation  of charged particles on continental  solid surface as the total area of   Oceanic  crust is larger (Approximately 3 times more) than  total area of continental crust which provide higher capacitance value in between  Oceanic plate & ionosphere than the capacitance that exist in  between Earth crust & Ionosphere according to equations C = KƐA/d , (1), C = Q/V ,(2). (Here “K” is constant, “Ɛ” permittivity of Space, “A” is area of conducting plate, “d” is  distance between two conductors, & “Q” is total charge on conductor, “V” is voltage difference in between two conductors, “C” is the capacitance in between two conductors  ).     These  concentration of charged particles / ions is very high where magnetic fields  are very strong  like polar regions, top of Atlantic ocean like area identified as Bermuda triangle e.t.c  that  may results interruption of aviation signal for flying aircraft which may be one of the major causes for its disaster.

Aircraft flying in this region face disaster for the  following reasons 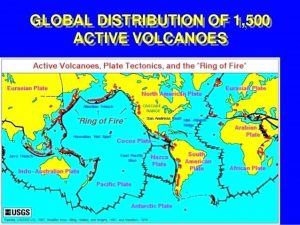 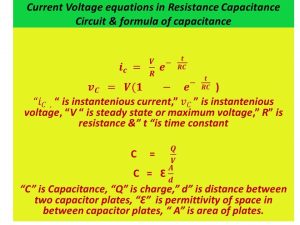 Pharoah and the responsibility of leadership by S N Smith