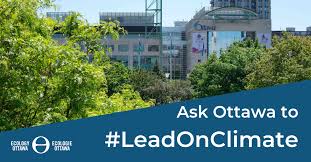 Canadians have long demanded that the government take serious action to curb the threat of climate change. They know the science. Our Earth is warming and Canada is warming at a rate twice as much as the global average. For the average Canadian and our overall economy this means more extreme temperatures, more flooding, and more drought, to name a few of the negative impacts of climate change.

Our government is aware of the necessity of strong action on climate change – strong action that still benefits Canadians and the economy. On April 1st, our government began putting a price on pollution in Ontario through the Federal Carbon Pollution Pricing System after the Provincial government ended their own Cap and Trade System. This will work by pricing emissions by large facilities which output significant quantities of carbon and by charging fossil fuel distributors.

Pollution pricing in Ontario will be revenue neutral. Residents of Nepean can rest assured that the funds generated by pricing pollution will flow back into their pocketbooks and their communities. Climate Action Incentive Payments will ensure that Ontarians get money back when they file their tax returns. An average family of four in Ontario will receive $307 this year, and this amount will increase over time to account for increases in pollution pricing rates.

What’s more, the rest of the proceeds will be used to give back to sectors particularly affected by the price changes such as schools, hospitals, small businesses, and not-for-profit organizations. This will mean $1.45 billion over the next five years invested into Ontario communities.

This policy will go a long way in deterring the use of fossil fuels and promoting green innovation which will create more good paying jobs. Together, we are working with provinces, communities, and stakeholders of all kinds to protect our environment and help preserve a planet our children and grandchildren can flourish in.