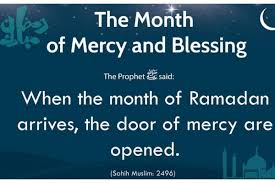 Ramadan is the month of Mercy & Blessings,

The importance, and the commandments for

the month of Ramadan.

one day the Prophet S.A said: “The month of

Ramadan has come, it is full of blessings, Allah

deeds, unfortunate is the person who has failed to get Allah’s blessings in this blessed month.”

denied 1)fasting person’s during iftar time.2)A just ruler.3)An oppressed person for whom the

WISDOM IN FASTING: Along with following Sunnah and discipline, fasting cleanses the heart

of all vice like greed, envy, and oppression. Instead of selfishness and cruelty. It cultivates

charity and helpfulness, love and servitude for humanity.Fasting creates a close similarity between humans and angels.The angels start to

Love humans as the absence of vices( due to fasting)brings them closer to us.According to Ahadith, the smell of the mouth of a fasting person is much dearer to Allah(swt)than musk.

Whoever Allah loves will also be loved by the Angels and Angels in turn put love for that person in the heart of other people. The person

is loved by the creator and the creation. Whatever  that person needs, they only have to think it, and Allah will fulfill their needs. Fasting

cleanses and purifies the heart and turns it into

a house of Allah. Ibadat and Tilawath make it

shine with Noor and enlighten the bleakness inside & outside the heart.

SALAT UT TARAWEEH: Allah ( swt) has made taraweeh Sunnah in the month of Ramadan.

Allah has made it to rejuvenate our hearts.

Every person with Iman should remember that

tge prophet said: “In Ramadan the reward for every good deed will be equivalent to Fard.”

In the Quran. According to Ahadith , reading one letter of Quran gives the reader 10 blessings and

since the blessings in Ramadan increase 70 fold,

finishing the whole Quran will give you more than

25 million blessings.How blessed is the person

Who has ignited the Noor of Allah, in their heart and removed the bleakness around their heart with Noor of Allah.There is a special relationship between Ramadan and the books of Allah as they were all revealed in Ramadan, May Allah give us tawfiq to recite the word of Allah till the

last moment of our life.

ETEKAF: There Are three kinds:

NAFL: There are no limitation of the time and duration. It can be done whenever and however long we desire.

WAJIB:This is to fulfill promise to Allah(swt) if,

for example one promises Allah certain days in

ETEKAF in return of relief from difficulty, etc.

MUTAKIF:A person who goes to the house of Allah and plants himself there and refuses to

budge until his request is granted.This is tge great way of seeking Allah’s blessings and getting Allah’s Raza  as the clouds of mercy of

Allah are ready to rain down mercy & blessings.

LAILATUL QADAR:”Verily we have sent it ( this Quran) down in the night of decree ( Lailatul-Qader).And what will make you know that what the night of decree is ? The Night Of Decree is better than thousand months.There in descend the angels and the Rooh(i.e Gabriel) by Allah’s

permission with all Decrees, peace ! Until the

Allah(swt), with his infinite wisdom and mercy has hidden the blessed night in the last 10 days

of Ramadan so that a Muslim would crave the blessings and increase the efforts to find the blessed night, perhaps, by worshipping the entire night on every night in the last 10 days of

Ramadan. It was the prophet’s tradition, according to Aisha RA, he would pray all night on the last 10 days on Ramadan and ask his family

to participate with him.

May Allah give us tawfiq to observe lailatul QADAR.

ZAKAH: It is a natural law put in place by Allah that those have more give it to those have less.

If a person has an excess of blood in his/ her body, it has negative effect on their health.

Donating some of their blood to a person who has deficiency of it will relieve them of bad health.

Similarly a person with excess wealth is obligated to givev2.5% of his/her savings to

the poor and needy who need it to fulfill their needs. if the Zakat is not given to the poor, it will

cause spiritual affliction like greed etc, and in turn causes physical afflictions. In every day life,

the reward for giving $1.to the poor is equivalent to giving $700, but in Ramadan, the reward increases to an equivalent of $4900 for every )1.

SADAQAH FITR: In any society there are two ways of expressing happiness, the way of God and the way of people.

gave us a special month for worship and to help us further, he has locked away Satan for the entire month of Ramadan.To express happiness and gratefulness, there are two ways that Allah

has designated, monetary gratitude and spiritual

gratitude, monetary gratitude is that we give a small amount equivalent to 1600 grams of wheat, to the poor so that too are included in the

gold of celebrations of Eid. The rich and the poor, both participate in the celebration of EID.

The spiritual gratitude is expressed in the form of 2 RKAH’s salat performed on tge day of Eid.

Allah has given us whole month to acquire infinite blessings and these two ways of expressing gratitude benefit both the giver and receiver. That is the essence of gratitude, that every one benefit from it, questions regarding

This matter should be addressed to local scholars.

Spending in The way of Allah: In our society to

ensure preservation of humanity and human nature, there is a monetary system is in existence, and following this system is an important as moonlight for traveler in a bleak forecast, spending in a way of Allah is the best way to strengthen it.Its for this reason that Allah

SADAQAH and monetary restitution for all sorts of sins & crimes. A portion of wealth of the rich is thus transferred to the poor. Crimes, which are usually a result of lack of Islamic knowledge and

Punishment which require spending of money, hold the system in place, and keep economic balance.Fines are part of economic balance, spending in the way of Allah is greatly recommended to keep the economic system stable and cultivate mercy in our hearts.Ego worship is denying Allah and the system is in

place to put out crimes and hatred resulting from

in the light of Islam “.

Author of several books on Canadian & US taxes.

Recipient service to Humanity award from