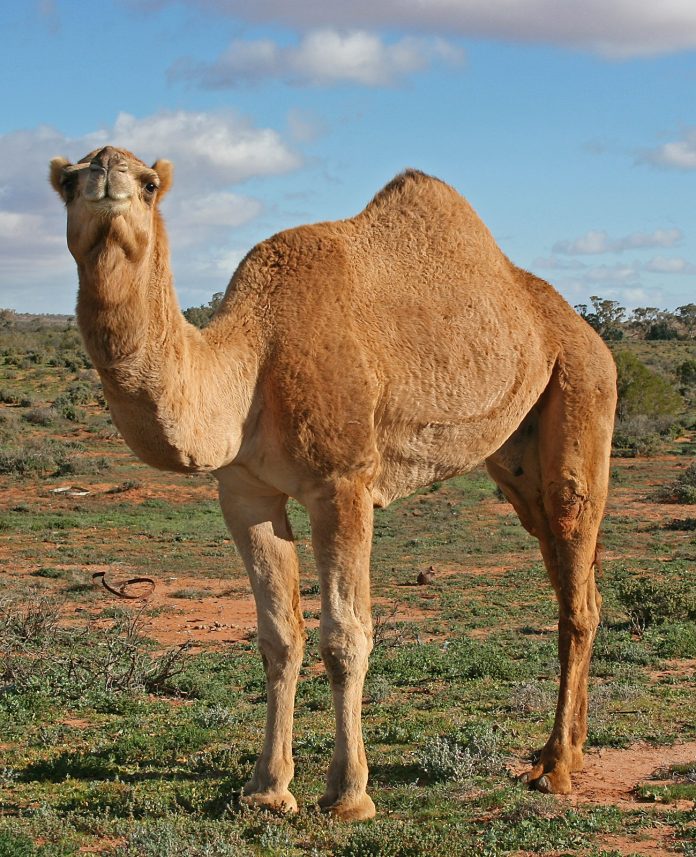 Camel is an indispensible animal for  the inhabitant of desert for  their  transportation . It can withstand from + 53⁰C to – 1⁰ C. No other animal can withstand such a high temperature . It can drink 130 Liter water in 10 minutes & can store such a vast quantity of water in its body, which is not possible for other mammal animal . The blood cells of camel is oval shape not circular like other animal, elastic in nature which is very useful to consume & preserve huge quantity of water by this animal. If any other animal would drinks such a vast quantity of water  then their blood cells  would have been burst due to internal pressure. But there is a layer on the blood cell of camel, which can withstand such an enormous pressure which allows this animal to store huge  quantity of water in its body. It can travel several hundred Km  distance with 150 Kg load on its back. Camel eats plant like cactus having big thorn without any injury inside,  due to  special design of internal structure of its  mouth  & tongue  .

In the eye of camel there are two layers of petals which prevent sands to enter in their  eyes and make insulation to the flow of heat inside their eyes to protect it from overheating which may causes lack of moisture & these moisture is essential for the eyes.

There is special design of nostril of camel which   prevent water loss during its breathing .

Foot stepping of camel is in such a way so that two left side legs (front & rear ) move  together & then two  right side legs move together which is different from other four footed animal.

The hump of camel is not to preserve water but to store fat a portion of which is transformed to energy for the nourishment of its body & another portion of fat is converted to water  at the cost of reduction of the  size of its hump  , when it does not get any  food & water . The hump resumes  to  normal size again, when the camel get food according to its requirement. The camel can survive  without food & water  simultaneously  for about six months  which is not possible for any other mammal animal (Like Cow, Horse, Donkey, Elephant e.t.c. )  in the world .

Sura  Ghashiyah 88/17 Do they ( Non-believers ) never reflect on the camels (Arabic-ebli ) and how they were created ?

2020 March issue of Canadian Dream; Opportunity to Write Your thoughts:Last...

2018 June issue of Canadian Dream ;Opportunity to Write Your...

Be a local River Keeper,Steve Desroches is a former City Councillor...