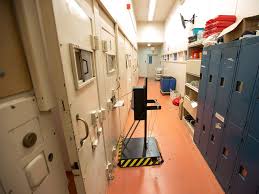 I am a social worker and I work with a lawyer who represents people seeking Criminal Injuries Compensation. Some of these people are themselves in jail. On July 19, 2018, I was in the waiting area of the Ottawa-Carleton Detention Centre (IOCDC) to meet Claude, my client. A lawyer who was there to see another inmate and I struck up a conversation.

Food, I said, appeared to be a major complaint, both in quality and quantity.  He was under the impression, he replied, that people received an adequate quantity of food, even if it was rather starchy.  At that point we were interrupted by a fellow who was there to visit a friend and who himself had been a prisoner there.  He corrected the lawyer.  Quantity is also an issue.

At this writing, Claude is in remand in OCDC.  He was arrested on May 26, 2017, on a drug charge.  He denies the charge.  His normal weight is 220 to 225 pounds, but in jail he was down to 193.  The doctor whom he saw in jail told him that 193 was a correct weight for him.  Later, before Christmas in 2018, the health unit at the jail took note of his weight loss and put him on Boost.  At this writing, he weighs 178, even with the Boost.  The doctor still tells him that his weight is normal.

Food is a constant concern. Inmate cleaners hand out the food to the other prisoners, a position that gives them power. “Cleaners run the wings,” said Claude. The cleaner on Claude’s range wanted him to buy him shampoo, in exchange for which he would get extra food, but the extra proved to be much less than promised. In addition, other people “take my food sometimes.” Besides short-changing him on food, the cleaner made unwanted sexual advances. He was able to get out of this unit and into segregation. There, the guard delivered the food, eliminating the threat of being short-changed, but there was still not enough.

Claude augmented his food supply by purchases at the canteen.  He also bartered.  “I would ask for milks from guys who did not want milk with their coffee.  I would trade these for a piece of fruit.”  When he gave another prisoner his packet of fruit crystal a guard warned him that if he did that again he would be pepper-sprayed.

Claude has some special dietary needs.  He told me that he is lactose intolerant and needs food that is gluten-free.  These needs are not taken into account.  As well, when he was assaulted and injured in Lindsay jail, he required a soft diet.  At that time, he wrote, “I can’t eat the bread they give.  Some days I’m hungry at night.”

Claude was not the only one who had trouble with food.  He described an incident involving a disagreement about food.  “This big guy punched a little fellow from France on the side of the head, with real force.”

Yet, another client did okay with food at OCDC.  John gained weight.  He made an arrangement with Muslim inmates who passed on some food that was not halal.  He traded them for desserts.  But you can imagine how that left the Muslims.

Food is not just an issue at OCDC.  Chris, another client, brought a more global perspective of conditions in Ontario jails, as he spent time in ten of them over a period from 2012 to 2016.  He had gotten out of the Canadian forces with mental health issues—post-traumatic stress disorder (PTSD), attention deficit hyperactive disorder (ADHD), and obsessive-compulsive disorder.  His offenses were petty crimes and breaches of conditions.

According to Chris, generally it was his experience that food was inadequate and of poor quality. In Toronto East, while quality was poor the portions were large. North Bay was an exception, where food was of good quality and quantity adequate. “There were no food fights in North Bay.” While he could not speak from personal experience, he reported that men raved about the food in Sudbury. Food was also good and in adequate supply in Quinte (Napanee), but the jail is badly run down and fights occurred over poor maintenance, for example in the bathrooms. Jails that did not measure up are OCDC, Maplehurst, Toronto South, and Lindsay.

Chris gave examples of conflicts over food, some of which involved him personally.  In OCDC, another prisoner demanded his dessert each day.  When he refused, he was told by the guy that he would have to leave the range.  When he failed to do so, a fight ensued, with both of them ending up in solitary.

Card games over food were characteristic of Sarnia.  When people were unable to pay up, fights ensued.  In Lindsay, Central East Correctional Centre, cleaners on the ranges distributed bread, which people wanted just to fill up.  They did not distribute it equally.  You had to do things to butter them up to get a good share, for example, sharing drugs with them or stuff from the canteen.  Those short-changed in the bread distribution might get into fights.  Fighting is normal, and the guards are quite aware of what is going on, Chris said.  He added that the cleaners in all the facilities abuse their situation.  In Lindsay and OCDC, gangs just steal food from guys, every day.

Both Chris and Claude were attacked at the Lindsay jail while using the telephone.  In both cases they were using the phone without ingratiating themselves to the cleaner.  In his assault, Claude was severely injured, requiring plastic surgery to his face at Toronto’s Sunnybrook Hospital, a procedure that required temporary removal of an eye.  I contacted Marie-France Lalonde, who was the Minister of Community Safety and Correctional Services at the time, demanding that charges be laid against Claude’s assailants and measures to assure safety while using the phone.  Claude would himself not lay a charge because of what happens to “rats.”  However, the severe assault was also an assault on the Crown. Lalonde took no responsibility, simply referring him to the correctional ombudsman.  When the Conservatives took over, the new minister Michael Tibollo also refused to do anything.

Correctional officials chose to abide by the most regressive element of jailhouse culture rather than act.  The failure went all the way to the office of the minister.  The gross neglect by Liberals and Tories was matched by the New Democrats.  E-mails to their critic of Corrections Taras Natyshak went unanswered, even when copied to NDP leader Andrea Horwath.

Last, we come to medical matters. Claude had to be insistent to be seen by a doctor for pain in his side, due to violence he experienced during the arrest. Eventually, a swelling of the lung was verified by an x-ray. He also wanted to have the attention of a specialist because of squealing sounds in his ears, following the assault in Lindsay and subsequent operation. It never happened, though there are still some noises in his head from time to time.

As for Chris, “Every time I was put in a new jail, I asked to see a psychiatrist.  I never saw one.”  He reports that in Lindsay the only way to get to see one is to threaten suicide.  “Many go on suicide watch to get their meds.”  And “Men trade their drugs to get what they need.”  He was only able to get his ADHD medication when he was in Lindsay because his family doctor wrote the prescription.  He relates that his mental health deteriorated more and more as he went from one jail to the next.

Four Years After the Rohingya Genocide: The Crisis Continues

Recognize Canadians  during Corona who are doing some of the toughest...