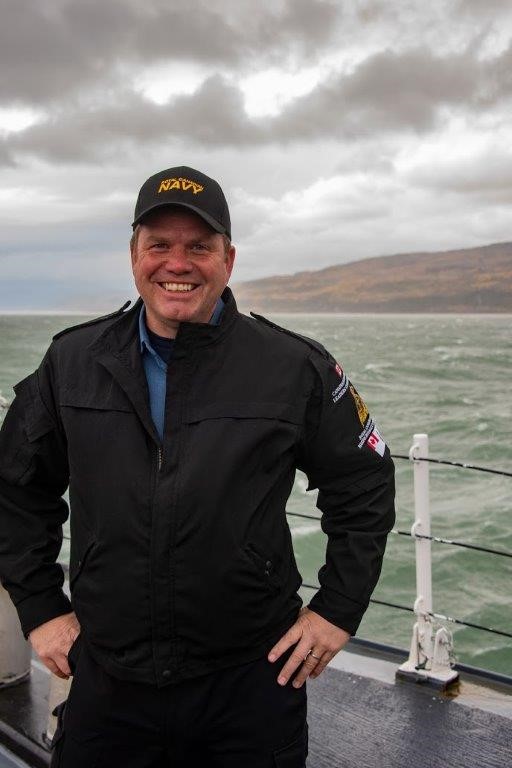 I have a great appreciation for the professionalism, dedication and bravery of our military service men and women. I recently experienced the trip of a lifetime sailing with the crew of the warship HMCS St. John’s under the Navy’s Canadian Leaders at Sea program. The initiative is designed to give civilian participants a first-hand, sea-air understanding and perspective on the day-to-day life of our sailors. I had the honour and privilege to travel onboard with Commander Peter Sproule and his crew from Halifax and Montreal. The HMCS St. John’s was taking part in a training and goodwill tour through part of the Great Lakes water system. It is not often that a Canadian frigate docks in the fresh-water ports of Montreal, Windsor and Toronto. The HMCS St. John’s is a Halifax-class frigate that was launched in 1996. Based on Canada’s east coast, the ship was designed as a general purpose warship with strong anti-submarine capabilities. She is one of twelve frigates that are the backbone of surface fleet and is equipped with modern radar, warfare and communication systems. The ship has a long and proud history and has carried out many military and humanitarian missions around the world. Although we see lots of naval uniforms in the Nation’s capital, many people may be unaware of the important national role played by the Navy – out of sight, out of mind perhaps. We cannot forget that Canada is a maritime nation with the world’s longest coastline. Canada’s ocean real estate covers seven million square kilometers equal to 70 percent of our land mass. Our economy and quality of life relies on our imports and exports and commercial ships carry almost half of Canada’s trade. Canada’s arctic seas are crucial to Canada’s future and the Navy helps protect our environment, commerce and security by navigating our northern seas. While in Halifax, I toured the shipyards that are constructing Canada’s new arctic and offshore patrol vessels that will be ready to help, lead and fight. Since high school I always had a fascination with the Navy and came very close to joining. My trip on the HMCS St. John’s gave me the unique opportunity to see the ship from stem to stern and happily I did not get sea sick! Over the course of four days at sea I climbed ladder after ladder to observe the many roles and responsibilities of the ship’s crew. I watched them conduct life-saving man-overboard drills and mobilize and defend against hostile threats. I observed the focus and professionalism of the crew as they navigated the busy and narrow St. Laurence seaway. I experienced the hearty meals that are so important to the crew’s morale when they are thousands of kilometers from home. I enjoyed the long-time Navy tradition of soup being served at 10 am as sailors took a short break from their duties. It was quite clear that training was key to ensuring the safety and readiness of the ship especially under the extreme conditions of warfare or harsh weather. We can help our Navy locally by sustaining a strong support network for families when their loved one sets sail. The Royal Canadian Navy has played a critical role in the history of Canada and the international community. Looking to the future we need a resilient Navy to preserve and protect our maritime interests and as Canadians we need to be “Ready Aye Ready” to provide the support and resources they need.

Steve Desroches is a former City Councillor and Deputy Mayor, Follow at @SteveDesroches