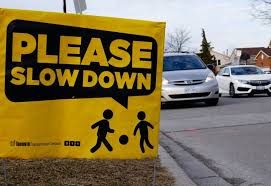 Like many people I was left scratching my head over the recent news that Ottawa ranked third out of 100 world cities as the “Best City for Drivers” in a recent international study. The report was carried out by a British auto parts dealer that compared a variety of data categories aimed at demonstrating the overall driver experience. The analysis relied on data that focused on infrastructure, safety and vehicle operator costs. While Ottawa scored well on infrastructure and vehicle costs, our city fared poorly in other categories. Sadly, for fatality rate we ranked 38th . On the so-called road rage score, we ranked 30th.  The road rage index relied on a local opinion poll which tried to gage the aggressiveness and general driving culture brought to the city by motorists. I expect many residents would agree that we are hardly world champions when it comes to our driving habits. When I was a City Councillor, the number one complaint in my office was speeding and aggressive driving on neighbourhood streets. Like most City Councillors, I faced a steady stream of requests for stop signs, lower speed limits, speed bumps, radar speed boards and stronger police presence. Years ago public opinion polls carried out by the police ranked traffic concerns as a top worry for residents ahead of robberies, guns and gangs! Despite best efforts to invest in safer roads and enforce traffic laws year-after-year, public complaints have persisted. Lower speed limits and all manner of new signs on the side and middle of our roads have not eliminated the problem. Speeders continue to speed. In response to these on-going concerns, a city committee recently approved an enhanced road safety plan. The draft city budget includes over $27 million in investment in road safety programs such as school-crossing guards, intersection improvements, traffic-calming measures and better arrangements for pedestrians and cyclists. Other key measures have included photo radar in school zones, red light cameras and school bus cameras. Making our streets safer comes with a significant cost to the taxpayer. Unfortunately, like other cities we seem to have a culture which favours speed and driver inattention instead of focusing on road safety. City traffic officials would frequently remind me that education and enforcement were key at getting to the root of the speeding problem. It was hoped that much like perceptions and behaviours on smoking, drivers could change their driving habits and a universal culture for safer roads would prevail. It made sense that dealing with the problem started with drivers themselves rather than the city installing a litany signs and lowering speed limits. It was also logical that firm and consistent legal enforcement was important. I will give full credit to the Ottawa Police who have ramped up their efforts in the areas of education and enforcement. Social media has helped with the education and enforcement campaigns. Several Ottawa traffic constables use their personal social media like Twitter to demonstrate how they are actively enforcing our traffic laws and pointing out examples of really bad driver conducts. If you are interested in following their work, look up and follow a few examples such as @TheBeardedCop @carbinecane and @queenswaycop. Their social media posts highlight both the challenges that they face each day and the severity of punishment for those who put themselves and others at risk. I hope everyone follows and shares their postings to help create a trending message for better driver conduct. Instead of spending our way out of the problem, let’s all be part of the solution and commit to being better drivers.  To borrow loosely from Gandhi, drive the change you want to see.

Steve Desroches is a former City Councillor and Deputy Mayor