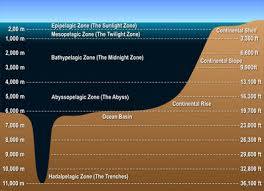 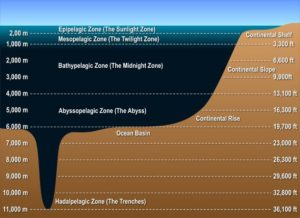 Earth crust can be divided by two main zones named by Continental crust  & Oceanic crust. About 71 % of earth surface is covered by water & 29 % of it is land. Continental crust is 32 Km thick, having density 2.6 gm. / cm³ , is made of mainly granite  & Oceanic crust  is 8 Km thick , having density 3.0 gm. / cm³ , which is made of basalt .The ocean holds about 96 % of all earth’s water. The division of ocean water according to depth are known as abyssal zones. Each layer has its own characteristic feature of pressure ,temperature, salinity & biodiversity . From ocean surface to ocean’s deepest point in trench is about 11 Km. The pressure , salinity increases with depth followed by the  decrease of amount of sunlight & temperature . From 0 to 200 m is sunlight zone, 200 m to 1000 m (1 Km) is twilight zone, 1 km to 4 Km is midnight zone, 4 Km to 6 Km is Abyssal zone, 6 Km to 11 Km is trench zone. Pressure at ocean floor, which is located at  6 Km depth is 600 atm & temperature is just above freezing point .

Ocean’s floor is not flat &  it does not have a sandy beach . The  Ocean floor consist of  valleys, mountains, seamounts ,plateaus  , ridges, volcanoes , hydrothermal vents, trenches etc. Sometimes crack appears  in its floor .

Absence of sunlight at 6 km below ocean surface prevents the production of oxygen from CO₂  by the photosynthesis of plants, which makes survival  very difficult for normal or common  marine plants & animals at this level . Moreover the increase of  pressure ( 1 to 600 atm at bottom ) with Ocean’s depth causes survival of  invertebrate marine animals/living organism  & marine plants without trunk or stem  in  the lower levels of ocean   Also food at higher depth of ocean  for common or normal marine creatures is not easily available for the same reason.  Brine filled methane escape from , ocean floor cracks, provide energy  for bacteria.  .Minerals  released from hydro thermal vents is  processed by bacteria. Organism at this depth depend on sinking organic material to provide their own nourishment & act  as a part of food chain to supply food to marine animals, those  are existing  in all the levels  from bottom to very close to ocean surface also .

Temperature at the centre of Earth is 5400⁰ C , & pressure is 33 00 000 to 36 00 000 atm which is variable . Most of the volcanoes  including the gigantic volcanoes has been placed  in oceans by Al Mighty GOD which is one of His  greatest favour for all  human being. . These volcanoes has got very long  vents up to ocean floor to release the material in the form of dust, solid, liquid, gas to reduce the pressure, when it crosses safe limit which prevents  the enormous or large scale  explosion of oceanic & continental crust of Earth. During the ejection, when the pressure is reduced in such a way that it attains to safe limit  by throwing  material outside the Earth crust, then flow of  material in upward direction  is stopped , which results blockage of   transmission of enormous heat flow  by convection  method towards Ocean floor. Afterward the ejected   liquid material becomes solid by the influence of freezing temperature at the bottom of ocean floor which causes seal of the vent at ejection point for certain time period & the above process repeats again & again after certain time interval.  So these types of vents of the volcanoes behave like a safety valve of a pressurised boiler. If the volcanic  eruption  includes even  a  moderate ( Not enormous  explosion)  , it can throw very large   size of  stone which may originates  from  oceanic crust that may  kill living organism by direct striking  &  it has been  prevented due to the  location of ejection point  at  Ocean floor where  pressure is 600 atm downward.  .  The lava having very high temperature  including  dust, smoke, gas etc  ejected from volcano  is  absorbed by  water as it is located at bottom under the surface of Ocean  having  600 atm downward pressure there .   If these  types of volcanoes would have been placed under Continental crust instead of oceanic crust, then  ejected dust , gases ,smoke etc would have been form a layer in atmosphere in such a way , which could  prevent sunlight to appear at earth surface. As a result of this situation production of oxygen from plants by photosynthesis process would have been reduced due to insufficient sunlight (Act as a catalyst) which could make breathing problem for all the human beings.

Verse of Holy Quran related to above analysis

Sura Nahal 16/18 If you would count up the favours of ALLAH, never you would be able to count them. ALLAH is ever forgiving and most merciful. (Sura 14/34)

Example of volcano , located  in   Ocean  floor that belongs to  Oceanic crust  & Ocean  composed of liquid iron & nickel ,which is 1400 miles thick from top to bottom having spherical shell & is  known as liquid outer core of earth at a depth of  1800 miles  under the  Oceanic crust ,which most probably  has been mentioned in following Hadith

“ No one should sail  on Sea, except the one, who is going to perform haj or Umrah (Pilgrim) or who is fighting in ALLAH’s path, for under Sea there is fire and under fire there is sea “

Under the Oceanic crust (in Solid state ), there is upper mantle (in semiliquid state ) , then lower mantle (In semiliquid state ) having thickness of 1800 miles together , then  liquid outer core made by ions of Iron & Nickel having thickness 1400 miles, then solid inner core (in Solid state) made of iron & nickel having thickness 800 miles. The solid inner core behaves as  the permanent magnet, which creates permanent  magnetic field , that has been observed in  north & south pole of Earth.. So  1400 miles thick  liquid outer core , that  is rotating in opposite direction with respect to all the other layers of  Earth,  most probably  has been mentioned in 2nd part of the verse  as “Under the fire there is sea “ which is invisible ocean  &  1st part of  the above verse,  is visible  Ocean made by water. There is a flow of hot  liquid iron & Nickel  consist of charged  particles / ions  from the beginning of this layer towards the upper level in this  liquid outer  core, then it returns to lowest level , which results the  circulation of liquid material that,  originates from difference of pressure & temperature in between this two levels.  The above circulation of liquid iron & Nickel is  same like the  circulation  of water from bottom  of Ocean floor towards the surface of Ocean. This flow of liquid iron & nickel  consist of charged particles/ions  in liquid outer core & its rotation in east- west  or opposite direction with respect to inner core & all other spherical  layers of Earth  with very high velocity   creates very strong  electromagnet ,which influences the behaviour of Magnetosphere  located just above ionosphere  at  the outermost boundary  of atmosphere. This Ionosphere & Magnetosphere together prevent ionization  of  different downward layers of atmosphere consist of Oxygen, Nitrogen, Ozone gases etc .

Continental movement or land movement has been preferred over the movement through Ocean in the above hadith  as the most of the  active volcanoes (about 1500 volcanoes  still today ) in  the whole world  has been placed under  oceanic Crust but not under continental crust to release the  enormous  pressure which is 3300 000 to 3600 000 atm at the centre of Earth.

Functions of mountains in Ocean

Sea fish is an important source of minerals which is enriched with  iron ,zinc, iodine, magnesium & potassium etc. These minerals are  ejected in the form of liquid, gas etc through crack, hydrothermal vents or vents related to volcanic eruption  located in ocean floor, which starts after, continental shelf , continental slope etc  towards the centre of ocean means at a distance of several hundred  Km from sea shore , where minimum depth of ocean from  surface is about 3.5 Km. The bacteria  converts  minerals ejected from ocean floor to feed the plants as a part of food chain  for the consumption of marine animal like fish & other marine living  creatures . Sunlight ( act as a catalyst) is  very essential for plant to produce  oxygen from CO₂  &  is very poor or absent  after twilight zone means in midnight zone which is located at  1 km below the ocean surface. So  mountains having height at least  more than 2 Km is essential to support the plants at this level of ocean (In Sunlight zone, Twilight Zone etc.), which may supply food for marine animal such as fish & other marine living creatures  for their  survival at this levels. The marine fish as food &  oil from marine fish (Like Cod, Salmon, mackerel etc.) in the form of capsule is consumed by human being to prevent heart diseases, skin diseases  & to achieve proper function of brain, eye etc. Almighty GOD has provided enormous number of mountains, volcanoes etc  under the ocean surface for the benefit of mankind.

In some situations  the material ejected by  the vents related to volcanic activity, hydrothermal vents, crack etc located in ocean  floor may contain some chemical components , which after the biochemical processing by bacteria  may be transmitted through food chain to upper level of ocean. After the  consumption of this transmitted material the bodies of  marine animals, plants, rocks /stones  etc may developed some attractive colours (Red, Yellow, Blue Green, violet etc, means a  colourful  Marine World ,  which has been noticed in case of “Great barrier Reef” located in Pacific Ocean  beside eastern coast of Queensland ( Distance of Reef from closest city  Cairns is 254 Km ), that  belongs to Australia.

Holy Quran about erection of Mountains in the whole World

Exhaust gases from automobiles, waste discharges from industries in the form of gas, liquid & solid has polluted surface water belongs to lakes, rivers etc & drinking water preserved as  ground water under the surface of Earth. Fossil fuel or non-renewable minerals   like Oil ,gas , coal that belongs to continental crust are going to be exhausted within a very short time . Then human being will collect  enormous quantity of water from ocean in future & after desalination they will use this water  for irrigation, industry ,  domestic  & drinking purpose. Also vast quantity of  oil , gas etc preserved as fuel under oceanic crust will be used by automobiles & modern industries. Major portion   of protein which belongs to marine fish that contains minerals like iron , zinc, iodine, magnesium, potassium etc,    will be consumed  by human being in very large quantity as food & to prevent many complicated  diseases , including  life threatening  diseases . Use of .Ocean /Ocean water will be an indispensable part of human life & mankind will be dependant in very  large scale on it in near future. 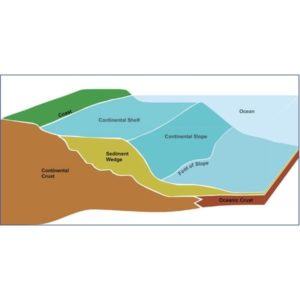 2019 December issue of Canadian Dream; Opportunity to Write Your thoughts...