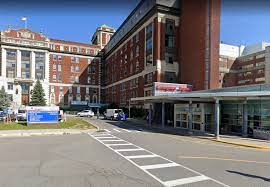 The Ottawa Hospital Civic campus is currently undergoing an expansion and modernization to
bring it into the cutting edge of care, research and education. This new development will turn
the current hospital into the largest and most advanced health care unit in Canada.
Cameron Love, the CEO of The Ottawa Hospital states “Not only will it provide the most
advanced services for those with the most complex injuries and illness it will also be home to a
research and innovation platform that will advance and revolutionize health care for the future
of this community and country.”
Opened in 1924, the Civic Hospital was built in response to the Spanish Flu pandemic of 1918.
Harold Fisher, mayor of Ottawa from 1917 to 1920, was an early champion of the hospital but
faced opposition when it the hospital was deemed to be located too far out in the countryside.
The “Fisher’s Folly” project became reality at a cost of $1,500,000 and held 550 beds.
Today, the Civic Campus is the region&#39;s only adult-care trauma centre and houses The
University of Ottawa Heart Institute, a leading regional cardiac and stroke care unit. It treats
patients from eastern Ontario, western Quebec and eastern Nunavut.
Located on Carling Avenue, at the edge of Dow’s Lake, the new expansion will make the Civic
Campus the largest hospital in Canada at 2 000 000 square feet. The operating rooms alone will
be large enough to hold two and a half football fields. It will continue to act as an acute care
hospital while also bringing cutting-edge academia and research to the front lines. Working
with the University of Ottawa, the hospital will have some of the best doctors, nurses and other
health specialists providing care and research for the injured and ill. Additionally, next-
generation innovation and data-based research will transform medicine.
Currently, at “Stage 2” of the Ontario Ministry of Health’s Capital Planning Process, the parts
are being put together. Space, design, and financial planning are all being discussed right now
to set the stage for the shovel to hit the ground in 2024. Many months of in-depth planning are
needed to achieve such a large-scale project.
Some of the highlights of the future hospital include an emphasis on equality and accessibility
for patients and their families and staff. Its location will provide patients and staff with views of
Dow’s Lake and the Experimental Farm. The new development will essentially be a futuristic
health hub in the middle of an organic landscape to help with well-being and both physical and
mental restoration. A strong collaborative system between different health professionals –
from clinicians to researchers in all fields related to well-being, including food production, will
usher in a more sustainable and interconnected healthcare model.
The site will be transit-oriented with all buildings connected to the Trillium LRT line. A multi-
modal transportation network will also provide pedestrians, cyclists and motorists easy and
safe access.
The Civic development is expected to be built in three phases. The first phase which has begun
will be complete in 2028. The new hospital will be about 2,000,000 square feet with 800 beds.

The project is estimated at over $2 billion. Its final phase is expected to be completed in
2047/48 which will include the new facility for the University of Ottawa Heart Institute.
It seems somewhat coincidental that the original Civic Hospital was directly related to last
century’s pandemic and its new inception is being informed by a current world pandemic. The
many lessons learned from Covid-19 are now being incorporated into the new health centre.
At almost 100 years old, the Civic Hospital will be going through an exciting renaissance but
what will remain the same is the strong dedication to patient care.