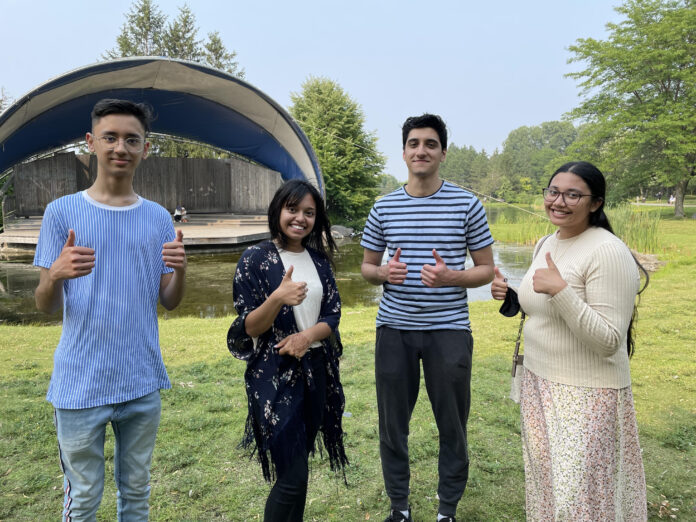 This summer as usual, CBET hired four student summer interns with the intention of helping CBET grow as a charity that not only supports students in Bangladesh, but also students, youth, and seniors in Canada.

Each intern has created a brief article explaining their role at CBET and the work they’ve accomplished this summer:

The first thing all the other interns and I did for CBET was create an audit report. We all looked over CBET’s website, social media, and other information for our reports. In our reports, we stated our observations and gave recommendations to CBET based on the information we found.

Other tasks I have done are competitor research, non-profit marketing research, sample designs for the next annual general meeting reports, and other tasks related to business/marketing analysis for CBET.

One of my last tasks was to make CBET a community partner with the Michaelle Jean Centre for Global and Community Engagement at the University of Ottawa. The purpose of making CBET a community partner is so CBET would have access to volunteers who attend the University of Ottawa. Currently, the task has the same status as last week, it is still being worked on.td

Finally, I helped to create game ideas for CBET’s upcoming outdoor event. The other interns and I had brainstormed some of the ideas together. The ideas include trivia quizzes where participants write their answers on whiteboards, squirt, mafia/wink eye murder, cup pong, and a cup stacking tournament. Only some of the ideas will be played at the next event.

A lot of the work I’ve done involves CBET’s donors. Although these tasks are quite simple, they are fairly time-consuming as CBET has around 800 donors. Some of the work I’ve done with donors includes contacting them through email and phone to obtain missing information from their records. I worked a lot with the master donor list as well as the CRA tax software to ensure that each donor had correct and updated information in both places, merged duplicate donors along with their data and added missing donors to the master list. I also created a user manual for the tax software. The manual includes general functions of the software as well as how to create tax receipts.

Dealing with CBET scholarship applications was something I spent a lot of time on while working with CBET earlier this year. This summer, my role with scholarships expanded. I worked with brother Ali to redesign and edit various scholarship forms, such as the CBET university, college, and renewal application forms. I also researched and created a formal letter draft to send to uOttawa, Carleton University, and Algonquin College with the intent of creating CBET scholarships at those institutions. I sent the letters to contacts I found by researching and calling each institution.

Finally, another portion of the work I’ve done this summer includes the annual CBET fundraising picnic, as well as the youth event. Together with the interns, we held various meetings to plan and discuss the activities and schedule for both events. I also obtained the park permit for the fundraising picnic from the city of Ottawa. As the lead for the youth event, I worked together with the interns in order to create a fun, educational and islamic experience for all age groups by planning various games and activities.

I’d like to sincerely thank CBET for giving me the chance to work with them and I look forward to continuing to work with CBET in the future.

Assalamu Alaikum. I am Arham Chowdhury and I am the event coordinator for the CBET 2021 summer job.

As the event coordinator, my day-to-day tasks heavily involve researching to come up with ideas for future events for CBET. I have spent a fair amount of time researching funding strategies and fundraiser events held by other similar charity organizations in the past. By looking into the success rates of the charity events and the process behind setting them up, I have written multiple reports on fundraising events that are best suitable for CBET.  Those reports included a list of charity events CBET can host in the near future with a detailed explanation and process behind setting them up.

I have also been in charge of creating a few youtube videos for CBET. I had to make a video for the 8th annual picnic as well as a video to promote CBET’s Facebook page. I was also in charge of sorting and reuploading all the videos from CBET’s past events onto the new Youtube Account.

Another major work I’ve done this summer includes organizing CBET’s 8th annual picnic, as well as the youth event. We held multiple meetings with the other interns to plan and discuss the activities and schedule for both events.  For the picnic, we had to plan and schedule games for kids as well as help set up the event. For the upcoming youth event, we have held multiple meetings to discuss fun, educational and Islamic games and activities for youths in all age groups.

I have also spent a good portion of my time  researching and writing grant proposals for CBET.  In the past, I wrote request letters and applied to multiple funding agencies for grant donations. Currently, I am working along with the other interns to write a formal grant proposal that we will use. I have also created a database with a list of many organizations that CBET can apply to for funding in the future. In this database I have included each company’s website link and contact information so CBET can use them in the future for funding requests.

Over the past few weeks of working with CBET, I have learned how to properly research, write formal letters and reports and many other skills. I would like to thank CBET for this amazing opportunity  and I look forward to continuing with CBET.

As fundraising campaign organizer for Canada Bangladesh Education Trust (CBET), I have worked on a variety of important tasks. Some of my tasks include creating online campaigns, filming & editing videos on specific subjects for CBET’s Youtube page, researching government grants for youth and youth events, and planning the upcoming CBET picnic with my fellow summer interns.

I began the weeks by creating accounts for CBET on different fundraising platforms and later starting campaigns with titles, captions, and images to summarize what CBET accomplishes to potential donors. I spent time researching multiple platforms that are frequently used to donate to charities. This allows donors to make a contribution through a variety of sites. From their favourite platforms to what they use most, donors are given more choices; which can also encourage the act of donating.

I also created a campaign through LaunchGood. The month-long campaign was based on the significance of donating during the 10 days of Dhul – Hijjah as well as on Eid-al Adha. I have worked on CBET’s stripe account; a very important step when creating any campaign for donations to go to a secure and legitimate location.

Later in my term, I created videos about Facebook, Instagram, the summer 2021 interns and CBET’s 8th annual picnic.

– Facebook: I spent time going through numerous posts on CBET’s feed to find pictures and videos that represent the overall Facebook page. I wanted to include everything, from pitha festivals to picnics and zoom events.

– Summer 2021 Interns: I asked each intern to send in a video presenting themselves, their job positions & explaining their daily tasks.

– 8th Annual Picnic: During the picnic, all of the interns were encouraged to film and capture as much footage as possible. Therefore, if we ever witnessed an important moment during the event, a picture or video would be taken. From there, I was able to make a CBET picnic video.

I researched all three levels of government (federal, provincial, and municipal) that are offering grants towards youth events. The federal and provincial governments provided the most options. I found a series of grants, however, none of them were for educational purposes or directed towards youth (expect Indigenous youth). Many of the grants were also unavailable, either due to covid or they had expired. I found a website called GrantWatchCanada that offered two different grants for nonprofits in Ontario. One grant requires events that enhance culture. CBET events such as our picnics & festivals greatly enhance the Bengali & Islamic culture. Through the activities played, the music we listen to, and the food shared at the picnic, they all enrich our culture and heritage. The second grant requires implementing strategies to help underprivileged youth in the community. Further research must be done for both grants.

All the summer interns had numerous meetings throughout the week of August 2nd. We spent days listing international as well as local companies to send donation proposals to. We then worked together researching each company and what they are looking for within grant proposals. Later in the week, we had a meeting with Dr. Irfan Butt on how to write mission & vision statements for CBET. We’re going to continue working on our donation requests as well as searching for more companies to contact.

All the interns had a few meetings to discuss and plan the picnic. We decided who would be in charge of games depending on the age groups. We decided to divide the youth into three groups. As leader and deputy leader, Umair and I discussed the schedule of the picnic in detail and the items to purchase. I began to set up some activities such as the gift wrap game, which was very successful in our last picnic. All the children enjoyed unwrapping new layers to find a prize at each turn.

Thank you to all our interns this summer for your hard work!

2016 May, Seven Themes of the Quran, Dr Emdad Khan

The two wives of Prophet Ismael: A lesson in thankfulness and...