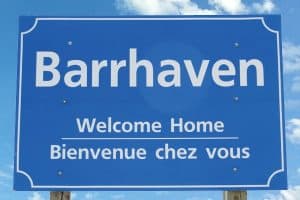 Barrhaven, now closing in on a population of 100, 000, wasn’t originally planned to be a suburb. Its beginnings are an interesting story.

As Ottawa’s population grew post-WW 2, there arose a need to house young families. Subdivisions began to appear beyond the Greenbelt. Mel Barr was a contractor from Kingston who had worked in Ottawa installing the sewers in Manordale subdivision. In 1959, Mel Barr bought close to 200 acres of land intending to build a horse-racing track. However, the Rideau Carleton Raceway (still in existence) was already being built in Gloucester Township. Mel Barr decided instead to turn the land he purchased into subdivisions. The addition of new infrastructure (a sewer that served the Agriculture Canada facility in the Greenbelt) made this plan possible. Mel Barr sold his land to builders and the rest, as they say, is history.

The first houses in Barrhaven sprung up in the 1960s. The new suburb of Barrhaven was just one of the suburbs cropping outside the original boundaries of Ottawa. Kanata and Orleans were also being developed around the same time.

In the 1970s, planners at the RMOC (Regional Municipality of Ottawa–Carleton was a regional government area and census division in Ontario, Canada, which existed from 1969 until 2001) predicted that at the turn of the century the population of Ottawa would reach 1 million. Their prediction was almost accurate. In 2019, the city of Ottawa officially surpassed the 1 million population milestone.

The RMOC began to plan for future growth and envisioned three “satellite cities.” Kanata and Orleans and a ‘south location.” There were critics of the plan but by 1977, the RMOC approved a south urban community and it became part of the official land-use plan. Among the early champions of Barrhaven, a new suburb that was expected to reach a population of 100, 000) were Nepean politicians Andrew Haydon, Ben Franklin and Walter Baker.

Barrhaven Public School, which not too long ago, celebrated its 50th anniversary, was the first public school built in Barrhaven. Jockvale School as you may recall, even though the first school built in the region, was not officially part of Barrhaven, the new growing suburb of Ottawa. Today, Barrhaven boasts 20 schools and more to come. Less than 30 years ago, Barrhaven didn’t even have one high school.

As Barrhaven grew, amenities started appearing alongside the population growth. Today Barrhaven is home to a movie theatre complex, big-box stores, a library and two recreational centres. Yet, somehow the feel of a small town continues. It remains a family-friendly community where people continue to want to raise their families. There are growing pains, of course, we need improvements in infrastructure and transit.

But perhaps what makes Barrhaven so special, is the people. Today, far different from its founding families, Barrhaven is home to a diverse, multi-cultural, multi-faith population.

At an event celebrating the one million population milestone, Mayor Jim Watson stated,” “You go into Barrhaven today, whether you’re going into a Tim Hortons or a school to speak with students, and it’s like the mini-United Nations there. And I think that’s one of the big changes.” And what a wonderful change that is!

On a final note, the city undertook a ward boundary review last year and has changed some ward names and boundaries.  The size of Barrhaven today has prompted its division into two wards – Barrhaven West and Barrhaven East.  This will better balance representation of the population of Barrhaven at the city level.  Information on the full Ottawa Ward Boundary Review process is available on the City website, along with maps of the new ward boundaries that will take effect for the 2022 Municipal Elections.

Our Youths, Our future: But Youths Under Stress, by Dr. Emdad...

Quote:When death approaches for the person,who is near to God, gets...

Birthright Citizenship: A Case of a Solution Needing a Problem,Ronalee Carey,...